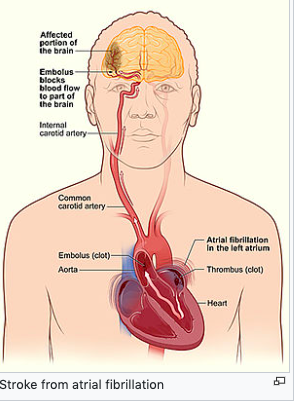 Stroke (CMP), stroke , and stroke is the second most common non-traumatic cause of mortality . In CMP, there are suddenly developing symptoms of impaired brain function, which are caused by a disorder of the blood supply to the brain. According to the mechanism of origin, it is divided into ischemic stroke ( also CMP, cerebral infarction) and hemorrhagic stroke ( hCMP). In acute care, both categories can manifest themselves in the same way, just as in acute care the individual procedures can coincide. In both cases, it is an acute condition requiring urgent medical attention. One cause cannot be distinguished with certainty only on the basis of clinical examination, so they are often described as a whole, even though it is a very heterogeneous group of diseases and the ischemic and hemorrhagic cause differ with their subsequent treatment. Stroke is sometimes a stroke  , as it is a vascular disease and there are also clinical signs of focal brain disease, but some of the symptoms are different.

Stroke is divided as follows: ischemic , which are the most common - up to 85% of cases, and hemorrhagic , which can be further subdivided into subarachnoid hemorrhage and intracerebral hemorrhage . Circulatory failure is the second to third largest cause of death in most developed countries. The incidence of strokes ( ischemic and hemorrhagic together) in the Czech Republic is 2 times higher than in other medically developed countries, it is around 300 cases per 100,000 inhabitants per year. Ischemic strokes make up 80-85%of all stroke (CMP). Hemorrhages, regardless of the cause, account for about 20% of the total number of CMPs, of which 10-15% are due to intracerebral hemorrhage and the remaining 5% are due to subarachnoid or intraventricular hemorrhage. About 0.5% is due to cerebral artery thrombosis.

The causes of stroke include embolism (which often occurs, for example, in untreated atrial fibrillation) and subsequent vascular occlusion, thrombus in the field of atherosclerosis , cerebral artery dissection and other, less common causes - such as fat and air embolism, cerebral vasculitis . .

Stroke from atrial fibrillation A patient with suspected CMP is one who has experienced a sudden onset of at least one clinical acute symptom of CMP (see below) within the last 48 hours (these include symptoms in patients with TIA - transient ischemic attack). Clinical symptoms of stroke are divided into major and minor symptoms. The main symptoms include sudden hemiparesis , sudden central paresis of the facial nerve and sudden speech disorder . Side clinical symptoms include sudden visual disturbances (such as diplopia , sudden loss of vision in one eye and visual field loss in both eyes), sudden visual disturbancesbalance disorders (associated with gait disorder), sudden sensory impairment (on one side of the body, according to the extent of the disorder we distinguish hypesthesia, anesthesia, paresthesia), sudden impairment of consciousness and symptoms of possible subarachnoid hemorrhage . Disorders of consciousness can be further divided according to the degree of consciousness - so-called quantitative disorders of consciousness, somnolence, sopor and even coma can occur. Qualitative changes in consciousness are manifested, for example, by delirium and ament state. Possible subarachnoid hemorrhage is accompanied by a sudden, very severe headache (atypical, as yet unknown) and the development of meningeal syndrome - within the hours, stiffness of the neck begins .

Some symptoms may be from different vascular basins (eg hemiparesis may be from the anterior and posterior, as well as facial paresis with dysatria). Therefore, rapid procedures (heuristics) have been developed which, although they cannot locate the lesion, are easy to remember even for the general public and at the same time sufficiently sensitive and specific for the triad of patients  . The most well-known screening tool is FAST , which summarizes the so-called big symptoms , which every layman should recognize without any problems. It is very appropriate to disseminate their examination and description among relatives and nurses of the elderly. Small symptoms are harder to evaluate, but can be summarized as a " sudden change in condition ."

Only 1 positive in the last 24 hours is enough. For its simplicity, the FAST test is actively disseminated among lay people  .

The sensitivity of the mnemonic is enhanced by two letters: B - balance, E - eyes (diplopia, visual impairment, amaurosis), resulting in " BE FAST "  .

The symptoms correspond to the location of the focal brain injury. The location of the lesion depends on the vascular basin in which the stroke occurs. Some strokes affect only a small amount of brain tissue, do not have a sudden deficit and are asymptomatic or subclinical, however, they may be involved in vascular dementia .

In the frontal basin ( common carotid artery , internal carotid artery , middle and anterior cerebral artery ( cerebral anterior artery ) and anterior cerebral artery ), there is typically contralateral limb weakness ( frontal lobe syndrome ) and contralateral central facial paresis , in which dysarthria may be present . Pseudobulbar syndrome can develop in both cases , contralateral hemihypesthesia is present in the case of the parietal lobe , and is often among the symptoms of aphasia if the affected hemisphere is dominant .symbolic functions .

With CMP (due to its severity), timely and correct recognition of the type and stage of the disability is a very important aspect that determines not only the rescue of the patient, but also the subsequent quality of life. The physician and the nursing staff must be able to properly diagnose the patient as soon as possible and begin adequate and effective treatment immediately. The basic examination method is computed tomography (CT) or magnetic nuclear resonance (MRI), which determines what type of CMP it is. An extended diagnostics enabling individualization of the treatment procedure is then multimodal examination in the form of CT-angiography of cerebral arteries and perfusion CT of the brain. The treatment of iCMP versus hCMP is completely different.

The National Institute of Health Stroke Scale (NIHSS) is used to determine the severity of symptomatic impairment . It was originally developed for use in clinical trials  , but is now used for therapy  . 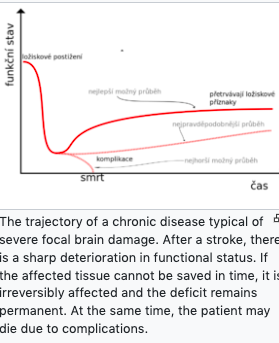 The care of patients with an acute stroke is defined and specified in the Methodological Instruction of the Ministry of Health . At the same time, there are recommended procedures of the Cerebrovascular Section of the Czech Neurological Society of the Czech Medical Society of Jan Evangelista Purkyně. A triad-positive patient must be transported with sufficient priority because these patients benefit significantly from early treatment in KCC or IC. Conditions for a smooth continuation of pre-hospital and multidisciplinary inpatient care are systematically created in the KCC and IC, where it is necessary to direct these patients primarily. The head of the field group is responsible for routing a specific patient.

Secondary prevention consists in preventing the recurrence of a given event and thus depends on the etiology. In the case of an embolization etiology of ischemic stroke, anticoagulant therapy should be considered unless the risk of bleeding outweighs the risk of thrombosis. For oral fibrillation , direct oral anticoagulation is the first choice, and CHA2D2S-VASc and HAS-BLED scores are used to estimate risks . If anticoagulation is contraindicated, occlusion of the left atrial appendage may be considered. If it is a paradoxical embolization through the foramen ovale patens , the method of choice is occlusion. In the case of atherosclerotic etiology, antiplatelet therapy is used. In small stroke ischemia) pre-dual dual antiplatelet therapy is in place for 3 weeks to 3 months, followed by monotherapy. Other procedures include carotid endarterectomy or stenting for carotid stenosis. The current influence of cardiovascular risk factors - smoking, hypertension, dyslipidemia, diabetes mellitus - is always essential .

In the case of bleeding, it depends on whether the cause of the bleeding persists and if there is a risk of recurrence. If the source of bleeding can be surgically removed, either neurosurgery, stereotactic irradiation or watchful-waiting monitoring of the development of pathology is chosen . Mostly experienced intracerebral hemorrhage for the patient is a contraindication to anticoagulation in the future, although it is always necessary to consider the potential risk and potential benefit. In this, the evaluation of microbleeds using hemosiderin-sensitive MRI sequences can sometimes help.

Subsequent long-term therapy includes, for example, rehabilitation, speech therapy, occupational therapy or spa care. In addition, the services of specialists such as neuropsychologists can be used.

The lack of intensive early rehabilitation of patients in post-traumatic care after CMP, undergoing craniotraumas, after surgical and neurological operations led to the development of so-called telerehabilitation (rehabilitation services provided via telecommunications networks and the Internet). One of the forms of distance therapy (distance therapy) can be video consultation, in which the patient is connected to a doctor or therapist at a distance. A study from the Kladruby Rehabilitation Institute in patients with aphasia (loss or speech disorder) after a stroke confirmed the need to introduce distance logotherapy in practice. Telerehabilitation provides increased intensity of therapy, the opportunity to participate in therapy at home. It will improve the quality of care and increase the quality of life of patients.

The trajectory of a chronic disease typical of severe focal brain damage. After a stroke, there is a sharp deterioration in functional status. If the affected tissue cannot be saved in time, it is irreversibly affected and the deficit remains permanent. At the same time, the patient may die due to complications. To determine the prognosis, it is important to determine the extent of brain tissue damage. Of patients who have had a stroke, about 40% die within a year, and of those who survive, 50% remain disabled, of which 25% have permanent severe consequences.

The trajectory of disease development is well described by the model development of severe focal brain damage  . At first, the patient's functional condition is sharply reduced, but at the same time it is a fragile period during which complications can occur (cerebral edema, bleeding, infection, thrombosis / embolism, etc.). At its best, part of the deficit is restored thanks to rehabilitation, speech therapy and occupational therapy procedures. However, part of the deficit remains stable. With severe complications, the deficit worsens or the patient dies. The probable scenario of the development lies somewhere between these borderline scenarios.