Secretion and physiological effects of catecholamines

The adrenal medulla is located at the center of the adrenal gland, being the innermost part surrounded by the adrenal cortex. It resembles literally a large sympathetic ganglion. It consists of cells called chromaffin cells which produce and secrete, upon stimulation, catecholamines; epinephrine, norepinephrine and dopamine. The chromaffin cells are modified postganglionic neurones, that have lost their dendrites and axons, receiving sympathetic innervation and stimulation by preganglionic autonomic fibers controlled by the CNS. The chromaffin cells have neuronal properties due to their embryonic-neural crest origin which is different from that of adrenal cortical cells. Thus the adrenal gland is referred as an endocrine gland of dual origin just like hypothalamus. The chromaffin cells form clusters around large and numerous blood vessels a feature that enhances the efficiency amd the velocity of the catecholamine activity. The medullary cells are considered as endocrine cells but in reality they exhibit neuroendocrine properties due to the neural origin of the adrenal medulla. The amount of dopamine secreted by the medulla is relatively small in comparison to the total body dopamine. It is used, however, as a precursor for the production of norepinephirne and eventually epinephrine. The most abundant catecholamine released by the medulla is epinephrine whose amount is five times greater than that of norepinephrine constituting the 80% of total catecholamine amount. 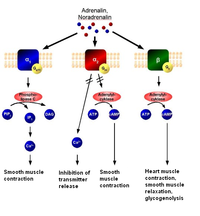