Electric current is defined as the rate of flow of negative charges of the conductor. For an electric current to occur, it has to be conducted through a material. When the flow of electrons provided by electricity finds a resistance, it results in a dissipation of energy in the form of heat. If there is an excessive amount of heat generated, the tissue may be burnt. Physiologically, the difference between a normal burn and a burn caused by electricity is that electricity has the ability to burn tissue beneath the skin, even burning internal organs without apparent external evidence of it

The contact with electric current can have various effects on the human body such as pain, burns or even death. There are many factors which affect the way the body interacts with current, such as the skin resistance, the voltage, the lenght of time of contact,the amount of electric current and its intensity. The body is extremely sensitive to the effects of electric current, that´s why this scenario can lead to a variety of outcomes. Firstly it disrupts normal  operation of our nervous and muscular systems. The other reason  when current passes through your body, it is transformed into thermal energy. This can cause serious burns, both inside your body and on your skin.

Currents of about 10 mA can cause a very painful shock. The longer the current continues to pass through you, the worse it gets. More heat is generated and the damage to your body increases, so the inability to let go can cause some serious problems. Currents above about 100 mA are almost always fatal unless immediate medical attention is provided.

The amount of current passing through a human body depends on two things: the voltage supplied by the source and the electrical resistance of your body. The amount of electric current that flows through the body determines various effects of an electric shock. Most current-related effects result from heating of tissues and stimulation of muscles and nerves.

Voltage, also known as electric tension si defined as the force that pushes electric current through the body. The curren flows for any given voltage depending on the resistace. It is the current that determines physiological effects.

Electroporation (cell membrane damage) is due to the application of a large voltage across a length of tissue. The major problem with electroporation is substantial cell death caused by high voltage pulses and only limited membrane repair. It is the reason why even a tiny contact with curent can lead to deep tissue injuries.

The general effects of electric current differ for man, woman and child. For the same amount of current, women generally have worse symptoms then men. In the case of child or babies normally there is a distinct dark mark, similar to a burn on the lips, once that in the first years of life babies use the mouth to discover the world around them.

One of the most significant physiological effects of electricity regards the nervous system. Electricity can affect all the network of nerve cells and neurons which process and conduct the signals responsible for the regulation of our body functions. The sensory and motor organs of our body such as the brain and the spinal cord work together to allow it to move, answer, think, sense and remember. Nerve cells communicate by creating electrical signals with very small voltages. If electric current of sufficient magnitude passes through the living tissues, its effect will be override the natural impulses of the neurons, overloading the nervous system and blocking the passage of voluntary impulses that activate in the muscles. The muscles will then involuntarily contract (tetany).

The effects of AC (alternating current) depends largely on frequency, low frequency tends to be much more dangerous than high frequency. AC with the same amperage and voltage as DC is more dangerous and provoke worse effects on the human body. Low frequency AC provokes muscle contraction (tetany) which can induce the "cannot let go" effect by freezing the muscles of the hand. This happens because the flexors of the hand are stronger than the extensors, so when an external electrical stimulation is applied, the flexors outdo the extensors. AC has a more of a tendency to induce heart fibrillation while DC makes the heart stop. That is why defibrillation equipment is DC, which stops the heart and gives a chance to recover.

Resistance is measured in ohms.

The human body has is own resistance to electric current, 99% os this resistance is at the skin. As referred anteriorly dry and wet skin have much different values of resistance but are not the only aspect to have in account in electrocution. Cuts and deep abrasions of the skin contribute to a significant decrease on the skin resistance. Skin act as a capacitor and permits more current to flow if a voltage is changing rapidly. The internal body resistance is about 300 Ω, being related to the wet, relatively salty tissues beneath the skin. Skin breaks down from 500 V onwards which results has a decrease of the body's resistance that can mean a bigger amount of current entering the body, damaging the nerves and muscles. This is one of the reasons why sometimes there isn't significant damage of the skin but a significant deep tissue injury.

Electric shock is a physical effect and a violent response to the electrical current, that enters the body.After an encounter with the electric current, there are primary electrical injuries, which indicate tissue damage. Electric current is able to create severe burns in the body. The reason is hidden in the power dissipation across the body´s electrical resistance. Shock can cause: cardiac arrest, burns to tissues and organs, muscle spasms, serious effects to the nervous system and other unexpected consequenses. Other disorders can appear in the weeks or months following the shock, depending on which organs the current passed through.

The low frequency alternating current produces extended muscle contraction-tetanus. Tetanus is the condition where muscles involuntarily contract due to the passage of external electric current through the body. When involuntary contraction of muscles controlling the fingers causes a victim to be unable to let go of an energized conductor, the victim is said to be frozen on the circuit..

Direct current is most likely to cause a single convulsive contraction, which often forces the victim away from the current’s source.

Internal organs are mainly affected by electrical burns. The burns of this kind may appear slightly or they doesn´t show on the skin at all. They are caused by the heat generated from the body’s resistance to the current passing through it. These cases are more dangerous than external injuries. 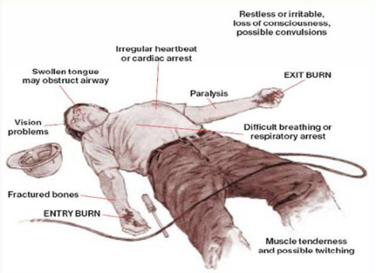 Internal burns are devastating and often have serious consequences: scarring, amputation, loss of   function, loss of sensation and even death. For example, if a lot of tissue is destroyed, the large amount of waste generated can cause serious kidney or blood circulation disorders.

Cardiac effects are among the most serious and among the most common electrical injuries. The issue is that the heart's central anatomical location in the chest and it is more commonly affected than other internal organs because the electric current usually follows the path of least resistance in the body along blood vessels and nerves, directing the current towards the heart.

Arrhytmias: Exposure to high voltage current is more likely to cause cardiac asystole, but even low voltage alternating current ca cause cardiac arrest by ventricular fibrilation.The mechanism behind induced cardiac arrhytmias is predicted to be initial damage to heart muscle and subsequent scar formation leading to abnormal elecrical activation of the heart.

Bradycardia: Injuries can result from interference with the normal conduction system The sino-atrial and atrio-ventricular nodes responsible for impulse generation and propagation within the heart may be more susceptible to damage by electrical injury than other cardiac cells.

Heart muscle injury: Chest pain may be absent and injury may manifest only as non-specific electrocardiograpjic changes, increased levels of myocardial proteins in the blood-troponin from damaged tissue. Occasionaly, mostly after high voltage accidents, myocardial infarction can be caused by occlusion of coronary arteries by blood clots or spasm.

The Blood Vessels: The walls of blood vessels through which a current has passed long enough to cause necrotic change become brittle and friable. The inner endothelial lining of the vessel undergoes changes and parietal thrombi are attached to the intima.

Neurologial:  Damage to nerve tissue may cause loss of consciousness, impaired recall, spinal cord injury, paralysis, or loss of sensationes in limbs. Electricity may pass through the spinal cord transversely, obliquely or longitudinally, resulting in many different cord syndromes. Permanent defects may remain, of which syndromes from loss of anterior horn cells are common. Peripheral nerves likewise may be transiently paralyzed or more perrmanently damaged by heat-effects from passage of current or by outright burns.

The eye: The changes observed on the eyes are usually late complications of electrical injuries.

Musculoskeletal system: In some cases the electric arc burns a deep hole in the bone, and the meninges and the brain, too, may be affected, in other cases of less severe types of accidents, the bone is often exposed by the destruction of the soft tissues. Bone fractures and luxations. Direct muscle damage and also compartment syndrome.