Physical principle of imaging with gamma-rays

Both 2D and 3D images can be produced. 2D images are produced using Scintigraphy ("scint"); with the help of internal radionuclides.

- Here, A nuclear medicine parathyroid scan demonstrates a parathyroid adenoma adjacent to the left inferior pole of the thyroid gland. 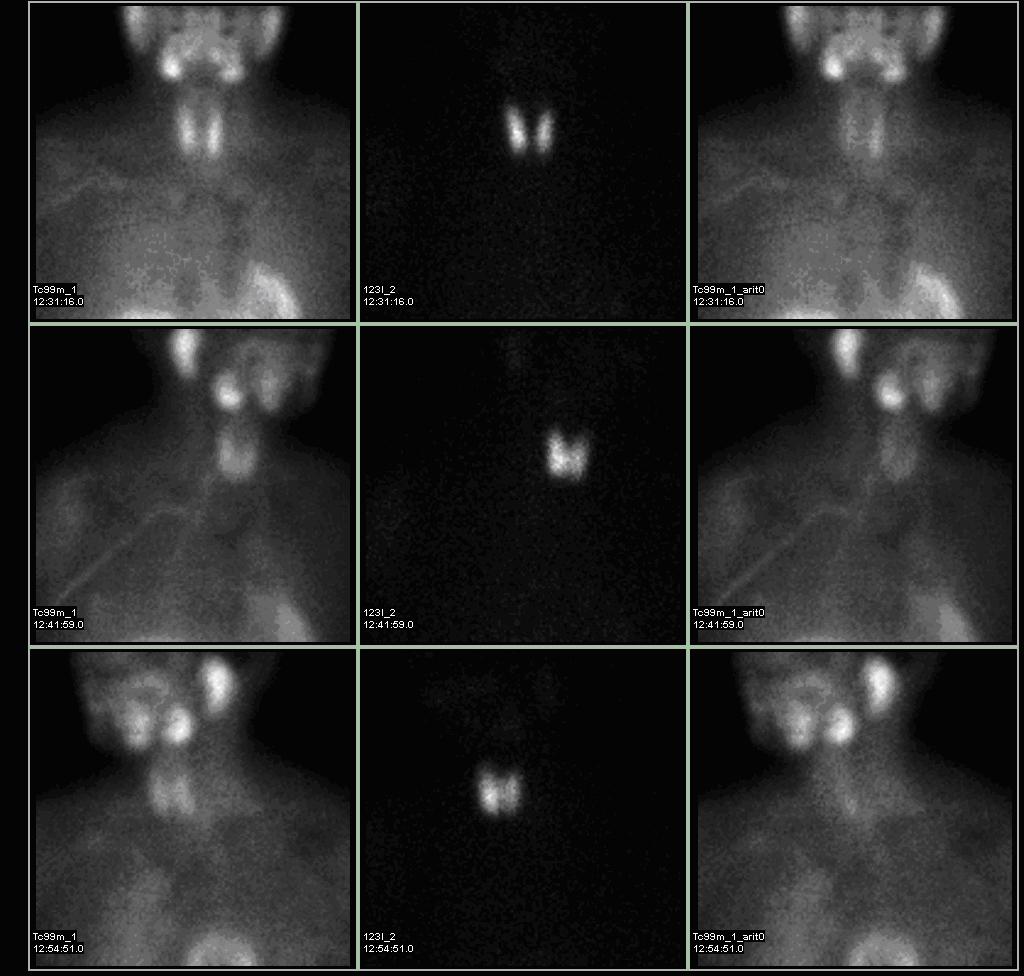 - A nuclear medicine hepatobiliary scan is clinically useful in the detection of the gallbladder disease.

- A pulmonary ventilation and perfusion (V/Q) scan is useful in the evaluation of pulmonary embolism.

3D images can be produced using SPECT, a 3D tomographic technique that uses gamma camera data from many projections which can be reconstructed in different planes. Another type of technique, positron emission tomography (PET), is able to image functional processes using coincidence detection.

Nuclear medicine tests are different from most other imaging techniques in that the main function of the diagnostic test is to show the physiological function of the system being investigated, unlike traditional anatomical imaging such as MRI or CT. Nuclear medicine imaging studies are typically more organ or tissue specific (e.g.: lungs scan, heart scan, bone scan, brain scan, etc.) than those in traditional radiology imaging, which instead focus on a specific section of the body (e.g.: chest X-ray, abdomen/pelvis CT scan, head CT scan, etc.). In addition, there are nuclear medicine studies available that allow imaging of the whole body based on certain cellular receptors or functions. Examples include gallium scans, indium white blood cell scans, MIBG and octreotide scans and the more commonly known whole body PET scans or PET/CT scans.

In nuclear medical imaging, radiopharmaceuticals are taken internally - intravenously or orally. This process is unlike a diagnostic X-ray, where external radiation is passed through the body to form an image. Then, external detectors called gamma cameras / PET cameras capture and form images from the radiation emitted by the radiopharmaceuticals.The procedure begins by the patient taking in a gamma-emitting radioisotope (a radionuclide), normally through injection into the bloodstream. Occasionally, the radioisotope is a simple soluble dissolved ion, for example a radioisotope of gallium(III). Most often, though, a marker radioisotope is attached to a specific pharmaceutical. This creates a radiopharmaceutical. The properties of the radiopharmaceutical allow it to locate itself in specific tissues of interest in the body. It is then possible to see the pharmaceutical concentration by a gamma camera which produces a 2D image. Single-Photon Emission Computed Tomography (SPECT) is a nuclear medicine tomographic imaging technique using gamma rays. The procedure is very similar to the typical nuclear medicine planar imaging using a gamma camera. However, it is able to provide 3D images. This information is typically presented as cross-sectional slices through the patient, but can be easily reformatted and manipulated as needed. [1]

The advantages of imaging using gamma rays include the fact that it is non-invasive, and there are no ethical issues. Some disadvantages are present however, such as the possibility of a patient that is worried about being exposed to the radiation. There may also potentially be harmful effects of radiation (gamma radiation is ionising). To counteract these issues, the benefit of the examination must be identified before a patient is exposed for a nuclear medicine examination, If the benefit does validate the procedure, then the radiation exposure (the amount of radiation given to the patient) should also be kept as low as reasonably practicable. [1]

A modification called CT can be added to SPECT in the most advanced tomographies, in order to achieve a better anatomical localization of the wanted objects and a better image quality. In PET/CT ,for example,this allows location of tissues or tumors that could be seen on SPECT scintigraphy,but are problematic to locate with regard to the other anatomical structures.  [2]

Future of imaging with gamma rays

Forthcoming systems are being designed with the aim of "low cost" clinical applications. New prototypes are being designed and built. The future of nuclear imaging holds cheaper, safer instruments that provide a higher resolution and are more sensitive to detect and quantify disease faster and more accurately and that are more accessible and easier to use. New technology platforms are being developed that would accelerate and lower the cost of discovering and confirming new molecular imaging probes. [4]