Osmotic pressure π can be defined as the excess pressure that would have to act on a solution separated from a pure solvent by a semipermeable membrane in order for the levels to equalize.

The unit of osmotic pressure is Pascal

Osmosis is a process that is characterized by the penetration of a solvent (most often water) through a semipermeable cell membrane, while the extracellular and intracellular environment of the cell is not in equilibrium in terms of the chemical concentration of substances dissolved in the solvent.

it is semipermeable, ensures the mediation of substances needed for the cell - metabolically / informationally

1935 – Dawson and Danielli – model of the cell membrane

thinner and less compact membranes – formed by phospholipids with unsaturated bonds in the phospholipid molecule the ultrastructure is basically the same in all of them transmission electron microscope – membranes appear triple layered (triple / double contoured), he believed that the dens layers were protein and the middle layer lipid,he called cell membranes - unit membranes - they separate individual compartments

The structure of the cell membrane

The basis is a bimolecular layer of phospholipids:

contains molecules of phosphatidylcholine or lecithin and sphingomyelin or sphingolecithin

→ Consequence – asymmetry of the cell membrane

The passage of substances through cell membranes 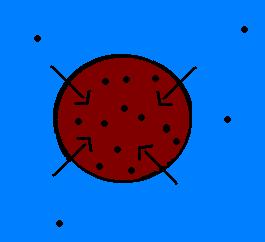 The substance is administered locally on the surface of the skin, mucous membrane or body cavity, where it is absorbed due to its chemical and physical nature, resulting in a local effect of the substance.

Osmotic pressure π can be defined as the excess pressure that would have to act on a solution separated from a pure solvent by a semipermeable membrane in order for the levels to equalize.

The unit of osmotic pressure is Pascal . 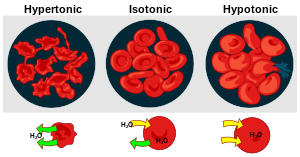 Behavior of erythrocytes in hypertonic, isotonic and hypotonic environments.

Behavior of erythrocytes in hypertonic, isotonic and hypotonic environments. The difference in osmotic pressure in the intracellular and extracellular spaces is the trigger for osmosis in living organisms. If the osmotic pressure is higher in the surrounding environment than in the cell, water will begin to pass through the semipermeable plasma membrane out of the cell. We are talking about the so-called plasmolysis .

The opposite case is plasmoptysis . This occurs when the osmotic pressure in the cell is higher than in its surroundings. Water begins to enter the cell through its cytoplasmic membrane, which can lead to cell rupture. In erythrocytes, this process is called hemolysis and you can see it in the attached image on the far right.

In living organisms, the extracellular and intracellular environment should be isotonic, otherwise cells are damaged by excessive water intake or loss.

Permeation of substances through a semipermeable membrane.

To make it easier to compare the concentrations of dissolved particles in practice, we introduce the terms osmolarity and osmolality.

We define osmolarity as the total substance concentration of osmotically active particles in mol/l (referred to the volume of the solution).

Osmolality is then the total substance concentration of osmotically active particles in mol/kg (referred to the weight of the solution). Blood plasma has an osmolality of approximately 300 mmol/kg, and we most often compare the osmolality of other solutions with this value.

Summary and connections between osmosis and osmotic pressure[edit | edit source]

The solvent tends to penetrate through semi-permeable membranes to places where the concentration of osmotically active substances is higher and dilute them.

As a result, the solutions on both sides of the membrane are equally concentrated. Osmotic pressure is one of the fundamental forces that affect living cells because the cytoplasmic membrane is semipermeable.

The flow pressure of a solvent penetrating through a semipermeable (semipermeable) membrane into a solution in which there is a higher concentration of dissolved molecules or ions.