Normal Pressure Hydrocephalus (NPH) is a set of typical symptoms (ataxia, incontinence and dementia) caused by impaired cerebrospinal fluid circulation. It was first described in 1964 by Dr. Salomon Hakim. 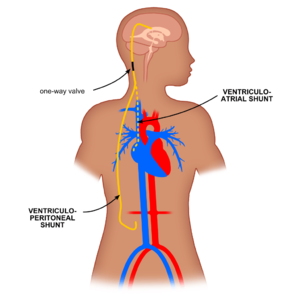 The causes of NPH can be very variable. The most common are trauma, hypertension, meningitis or some intracranial bleeding. However, there is still many patients with idiopathic form of NPH.

There a special triad, called Hakim´s trias, which is absolutely essential for NPH:

A typical patient with NPH is a man, at the age of 50 or more. The onset of disease is pretty slow and the first signs are connected with walk and stability. Dementia occurs lately and it is typically connected with behaviour changes.

Despite the name, we can usually find slightly increased pressure of cerebrospinal fluid and also the brain ventricles appear enlarged. The test, which can really help us with our diagnosis is a trial draining of a small amount (under 50 ml) of liquor by lumbal puncture or lumbal drainage. If patient suffer from NPH, the major symptoms then start to improve very quickly (especially the gait).

The method of choice is an implantation of ventriculo-peritoneal shunt, which serves as a permanent drainage of CSF from lateral ventricle to peritoneal cavity. This shunt normally leads under the skin of head, neck and chest. The prognosis of the patients is very good, after the surgery, but major is a matter of time. If we diagnose NPH at an early stage, it is possible to restore the damage.