Noonan Syndrome is a well known condition that has an incidence as high as 1:2000 births, with equal sex ratio.

Noonan Syndrome (also known as NS) was first described by Jacqueline Noonan (a pediatric cardiologist at the University of Iowa) and Ehmke in 1963. For years dysmorphologists recognized overlapping features between NS and the rarer conditions known as cardio-facio-cutaneous and Costello sundromes. These conditions are now recognized to form part of a spectrum of disorders explained by mutations in different components of the RAS-MAPK pathwaqy, with each sydrome displaying considerable genetic heterogeneity. 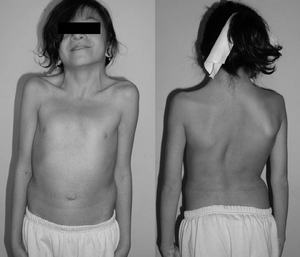 A picture of a girl with the typical features of NS

The features resemble those of Turner syndrome in females. Some of these might include:

A characteristic mild pectus deformity may be seen, and the face shows hypertelorism, down-slanting palpebral fissures and low-set ears. Some patients have a mild bleeding diathesis, and learning difficulties occur in about one-quarter.

In a three-generation Dutch family, Noonan syndrome was mapped to 12q22 in 1994, but it was not until 2001 that mutations were identified in the protein tyrosine phosphatase, non-receptor-type, 11 (PTPN11) gene. Attention has turned rapidly to phenotype-genotype correlation and mutation-positive cases have a much higher frequency of pulmonary stenosis than mutation-negative cases, and very few mutations have been found in patients with cardiomyopathy. However, facial features are similar, whether or not a mutation is found. Mutations in PTPN11 account for about half of all cases of NS. Mutations in the SOS1, SHOC2, KRAS, and MAPZK1 genes have been found in small porportion of PTPN11-negative cases. These genes belong to the same pathway, known as the RAS-MAPK.

The protein product of PTPN11 is shp-2 and this, together with SOS1, positicely transduces signals to Ras-GTP, a downstream effector. The KRAS mutations in NS appear to lead to K-ras proteins with impaired responsiveness to GTPase activating proteins.