THOUGH MOSTLY CORRECT I DOUBT WHETHER YOU UNDERSTOOD!

A Non-Newtonian fluid is a fluid whose flow (viscosity) properties differ from those of Newtonian fluids, described by Sir Isaac Newton.

Newtonian fluids[1][2] have a constant viscosity (flow). Viscosity, measures a fluids ability to resist gradual deformation by shear or tensile stresses, in other words, is a propriety that measures how easily a fluid move: if a fluid has high viscosity, then the fluid will move slower; if a fluid has low viscosity, then it will move faster. For example: fluids like water, have lower viscosity unlike fluids such as honey or syrup.

For Newtonian fluids, changing the force you apply to the fluid will not change their viscosity. The viscosity remains constant as the force applied changes.

Non-Newtonian fluids have viscosities that change according to the amount of force that is applied upon the fluid. The viscosity changes as the force applied changes. 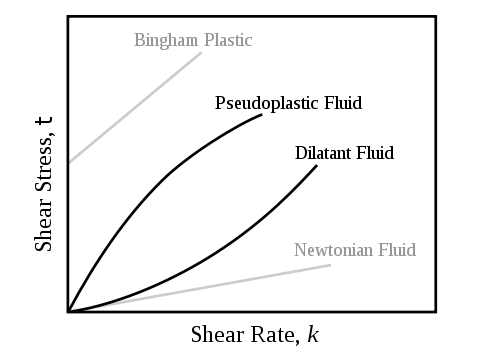 Usually, the viscosity of non-Newtonian fluids is dependent on shear rate or shear rate history, or their viscosity is shear independent but still exhibit normal stress-differences or other Non-Newtonian behavior.

In science, stress means that a force is applied to a body. The result of that stress is described as strain.

In a Newtonian fluid the relation between shear stress and the shear rate is linear, passing through the origin, the constant of proportionality being coefficient of viscosity.

In case of the Non-Newtonian fluids, the concept of vicosity usually used in fluid mechanics to characterize the shear proprieties of a fluid is not quite adequate. Instead, they are studied best through several other rheological proprieties that relate to stress and strain rate tensors under many different flow conditions which are measured using different devices or rheometers.

Comparating Viscoelastic, Non-Newtonian and Newtonian proprieties we can observe:

Understanding the behaviour of non-Newtonian fluids has important applications:

• Medicine - understand more about our body and improve health tecniques