Medical imaging is the visualization of the interior of a body. It is the technique and process which seeks to reveal internal structures for clinical diagnosis, treatment and disease monitoring. There are many types of medical imaging, the main types of imaging used in modern medicine are radiography, magnetic resonance imaging (MRI), nuclear medicine imaging(such as PET and SPECT), and ultrasound.

Radiography uses electromagnetic radiation in X-ray range (ionizing radiation) to take images of the internal parts of the body by sending X-raybeams through the body. The X-rays are absorbed by the material they pass through in differing amounts depending on the density and composition of the material (soft tissues do not absorb these rays while objects such as bones do).

Magnetic Resonance Imaging (MRI) involves radio waves and magnetic fields to look at the internal structures of the body. The MRI scanner uses powerful magnets to polarize and excite hydrogen nuclei of water molecules, hyrocarbons and other molecules containing hydrogen in human tissue, producing a detectable signal resulting in images of the body.

Nuclear Medicine Scan (such as PET and SPECT) involves in the use of radioactive tracers, which are radioactive materials that are injected or swallowed to travel through the circulatory or digestive system. The principle behind the use of radioactive tracers is that an atom in a chemical compound is replaced by another atom, of the same chemical element. The substituting atom, however, is a radioactive isotope. This process is often called radioactive labeling. The radiation produced by the tracer can then be detected by the use of a special camera (e.g. gamma camera) to take pictures of tissues and organs in the body to observe its activity and function.

Ultrasound Imaging uses high frequency sound waves which are reflected off body tissue to create images of organs, muscles, joints, and other soft tissues. The ultrasound waves travel through the skin layers which can be viewed by using electronic sensors.

Resolution and size of the image[edit | edit source]

Pixels are organized in an ordered rectangular array. The resolution of an image is determined by the dimensions of this pixel array: The image width is the number of columns, and the image height is the number of rows in the array.

Each pixel contains a brightness value (see quantization). The range of values(how many brightness levels) for each pixel is called color depth and it determines image quality. Each pixel can contain only basic colours or shades of gray which can be typically sufficiently saved in 8 bits (256 values). However the true colour images need 24 bits or more (over 16 milions of colours). The size of the image (e.g. in MB) is then given by: resolution of the image times bits for the pixel (color depth)

Digitization is the process used to convert analogue data (such as analogue image) into digital form that is saved in the computer memory, through two steps:

Sampling means dividing the image in pixels. Sampling gives the resolution of a digital image (e.g. in megapixels Mpx). It is necessary to choose an appropriate resolution to preserve all the information that are wanted to be capture. 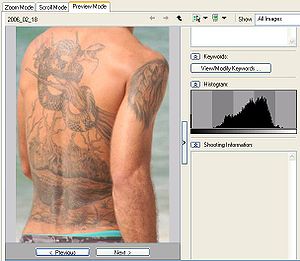 Image histogram is a graphical representation showing amount of pixels in the image for each brightness value.

• Equalization of an image

Some of the more common examples of digital image formats are JPEG, TIFF, GIF and PNG.

Most of the Digital Image Formats can be divided by their compression method:

No information is lost from the digital image file when a compression algorithm is applied to it. Includes: RAW, TIFF, PNG and BMP. Those image formats store the full RGB digital image without any loss of information. This comes with the advantage of permitting high quality reproductions but at the price of requiring a lot of memory to save those files.

Results in the loss of some image information to achieve a smaller file size. Includes: JPEG, GIF.

Digital imaging and Communication in Medicine, also known as DICOM, is a data format used in medical purposes to store, share and handle information of imaging files. It enables integration of different medical devices, such as scanners, servers and workstations, from multiple manufacturers by using the communication protocol TCP/IP.

working alongside DICOM are Picture Archive and Communication Systems, or PACS, which is capable of storing, providing and backuping 2D and 3D medical images.