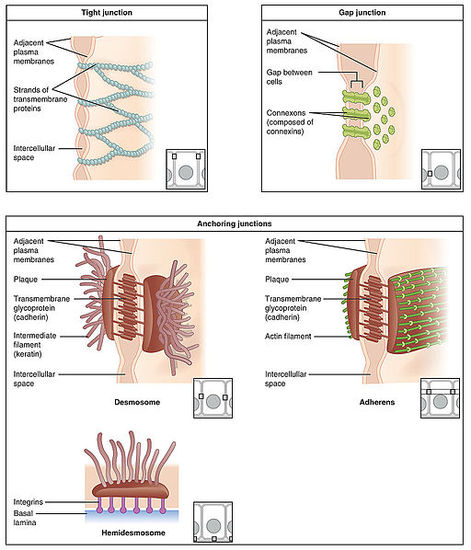 Intercellular junctions are structures which provide adhesion and communication between cells. They are mostly present in epithelial cells that are especially characterized by their strong attachment one to another and to extracellular matrix. Intercellular junctions provide in this way stability to the epithelial tissue which is claimed by mechanical forces. The different multiproteincomplexes each of these junctions have, allow also intercellular transport with the neighboring cells.

Three different types of intercellular junctions can be distinguished according to their function:

This type of junction is also called zonula occludens and is the most apical structure in the epithelial cell. Zonula occludens describes, that there is a formed band of tight junctions which encircles every cell. The main tight junction forms a seal between the two membranes. This seal consists of the transmembrane proteins caudin and occludin and provide transcellular and paracellular transport of molecules, but prevent passive flow between cells. In addition the band of tight junctions separates the epithelial cell into apical and basolateral membrane domains.

As well as the tight junctions the adherent junctions build an encircling structure just below, called zonula adherens. One main function of the zonulae is strengthening and stabilizing the circular occluding bands. Another important function is the linking cytoskeletons of adjacent cells. This is made possible by the transmembrane glycoprotein cadherin, which functions in presence of Ca2+. Cadherins binds catenin via actin binding proteins to actin filaments to their cytoplasmic ends and builds hence the terminal web. This terminal web is linked to the apical end of many epithelial cells and provides also cell motility.

These disc-like structures do not form a belt as the zonula adherens or occludens. They are matched to other desmosomes of adjacent cells. They contain proteins from the cadherin family like desmoglein and desmocollin. These proteins connect together to a dense attachment of anchoring proteins, including plakoglobin and desmoplakin, to provide points to which strong intermediate filament can bind. The result is a strong adhesion among the cells.

Hemidesmosomes are found at the basal domain of an epithelilal cell and connect to the underlying basal lamina. They tie as well as desmosomes intermediate filaments in cytoplasm, but contain mainly the transmembrane link protein integrin, which binds extracellular macromolecules laminin and collagen type IV. The integrings serve in this way a strong adhesion to the basal lamina.

The major function of gap junctions is the direct transfer and exchange of nutrients and signal molecules between the cells. A gap junction consists of proteins named connexin. Many of them form together a complex called connexon. This complex has a hydrophilic pore with the diameter of 1,5nm. This is why each connexon permit the exchange of larger molecules. Many pairs of connexons build the main communicating channel which can be found in the lateral surfaces of an epithelilal cell.