HOW ABOUT SOME BIOPHYSICS OF THE LIPID BILAYER? DID YOU GOOGLE IT?

The lipid bilayer has been firmly established as the universal basis for cell-membrane structure. It is easily seen by electron microscopy, Each cell in the human body is composed of a unit membrane which separates the cytoplasm from the extracellular environment. The most important components of this membrane are phospholipids, cholesterol, proteins and chains of olgiosaccharides (glycolipids and glycoproteins). The plasmalemma ranges from 7.5 to 10 nm in thickness and appears as a trilamellar structure in electron microscopes after fixation in osmium tetroxide. Because all membranes of cells and cell organelles have this appearance, the 3-layered structure was designated the unit membrane, which is a phospholipid bilayer. 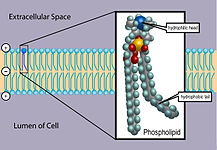 The most common phospholipid is lecithin (phosphatidyl choline) that consists of a non-polar (water-repelling) tail build by two long-chain fatty acids linked to a charged polar (water-attracting) head. Within the hydrophilic portion the molecule of glycerol is esterified with two fatty acid molecules (hydrophobic portion) and with one phosphate molecule which is again esterified with the aminoalcohol choline. The hydrophobic portion is made up by one saturated fatty acid (palmitic acid) and one unsaturated fatty acid (oleic acid). It is the shape and amphipathic (polar and non-polar) nature of the lipid molecules that cause them to form bilayers spontaneously in aqueous environments.

Phospholipid monolayers can be arranged either as a single surface film (e.g. in air and water or air and oil) or as micelles. A typical micelle is

spherical and forms an aggregate with the hydrophilic heads in contact with water, sequestering the hydrophobic single-tail regions in the micelle

centre. This phase is caused by the packing behavior of single-tail lipids in a bilayer. Micelles are important in fat metabolism.[1]

The hydrophilic / lipophobic polar heads of the phospholipids are directed toward the surface of the membrane, in direct contact with water. The hydrophobic / lipophilic nonpolar fatty acid chains are faced toward each other, away from water. Between the phospholipids van der Waals forces dominate which are relatively weak interactions between molecules based on diploes and intermolecular forces.

A special form of a bilayer can be found within liposomes or vesicles where it is arranged spherically. The liposome can be used as a vehicle for administration of nutrients and pharmaceutical drugs. it is composed of phosphatidylcholine-enriched phospholipids and may also contain mixed lipid chains with surfactant properties such as egg phosphatidylethanolamine. A liposome design may employ surface ligands for attaching to unhealthy tissue. The major types of liposomes are the multilamellar vesicle (MLV), the small unilamellar liposome vesicle (SUV), the large unilamellar vesicle (LUV), and the cochleate vesicle. Liposomes should not be confused with micelles and reverse micelles composed of monolayers.[2]

The bilayer structure is attributable to the special properties of the lipid molecules, which cause them to assemble spontaneously into bilayers even under simple artificial conditions.

Components of a cell membrane

The lipid composition of each half of the bilayer is different. In the outer leaf of the membrane phosphatidylcholie, sphingomyelins and many molecules of cholesterol can be abundant (espacially in red blood cells), whereas phosphatidylserine, phosphidylethanolamine and cephalin can be more concentrated in the inner half.

Cholesterol molecules are interspersed throughout the lipid bilayer often at a ratio of 1:1, affecting packing and fluidity of fatty acid chains in means of restricting their movements. As a sterol (or modified steroid) and as a lipid molecule it is biosynthesized by many animal cells. Thus it is an essential structural component of cell membranes that is required to maintain both membrane structural integrity and fluidity.

The membrane not only contains lipids (phospholipids and cholesterol) but also proteins that are immersed in the bilayer. Both lipids and proteins may have externally exposed olgiosaccharide chains and are then designated as glycolipids and glycoproteins leading to asymmetry of membranes. This so-called glycocalix can be 20 nm thick and is species-specific as well as cell-specific, thus facilitating cell-cell recognition and substance uptake.

The lipid bilayer is fluid-like, permitting movement of imbedded molecules (lipids, proteins) sideways within the membrane. A classic experiment by Frye and Edidin showed that fluorescently labeled transmembrane proteins could move from place to place on the cell membrane.

The lateral diffusion adds an almost fluid character to the membrane. This fluidity is influenced by several factors:

Membrane splitting occurs along the line of fatty acid tails of the phospholipids, because only weak hydrophobic interactions bind the halves of the membrane along this line. When cells are frozen and fractured (cyrofracture), the lipid bilayer is often cleaved along the hydrophobic center. Electron microscopy of cyrofrature preparation replicas is a useful method of studying membranous structures. Most of the protruding membrane particles seen are proteins that remain attached to half of membrane adjacent to cytoplasm (= P or protoplasmic face). Fewer particles are found attached to the outer leaf of membrane (= E or extracellular face). For every protein particle that bulges on one surface, a corresponding depression appears in the opposite surface.