Ion channels are transmembrane proteins, embedded in the cellular bilayer, serving as a semi-permeable membrane for ions. Ions pass through the pores of this membrane, triggered by an electro-chemical gradient, ligands or mechanical stimuli. Contrasting to other ion-transporting proteins, like e. g. the sodium-potassium pump, the transport is passive, meaning that no ATP is consumed but transport of substances occurs in direction of the concentration gradient.

Ion channels are mainly responsible for all kind of transports through the membrane of a cell or organelle:

Ion channels are composed of complex proteins, consisting of subunits which are gathered and embedded in the cell membrane. Each subunit is composed of segments of a protein. The subunits are arranged in form of a tube. At the entrance of the channel, a molecular constriction is located which acts as a selective filter, allowing only specific ions to pass. A single channel is able to transmit up to 108 ions pass per second.

Ion channels may be differentiated by their opening mechanism. 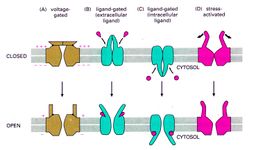 Depending on the mechanical stress on the cell, the channel opens. For example the change of pressure in the ear by sound waves, forces the basilar membrane to vibrate, causing the stereocilia to tilt. This movement exerts a force on the cell, which then opens the ion channel.

An electric signal is converted to a chemical signal, a messenger molecule, at the ends of nerves. The messenger molecule binds to a receptor, changes the structure of the protein and opens the channel by means of this mechanism. The transmembrane protein transports a specific ion actively through the membrane under consumption of ATP .

Another way to classify the channels is by means of the type of ions passing through:

Ions in an aqueous environment are surrounded by an envelope of water molecules called hydration shell. The reason for this is, that H2O molecules are dipoles. The hydrogen part is positively, the oxygen part negatively charged. Depending on the specific charge and concentration of the ions number and orientation of water molecules in this envelope are determined. As an example, the hydration shell of sodium is larger than the one of potassium .

The simplest way to realize a channel, is a simple tube. Depending on the size of the ions, the size of the protein channels could be adapted. But the efficiency and accuracy of such an simple ion channel would be insufficient. Therefore specific constrictions are located in the channel. By means of interactions with the aminoacids of the channel protein, these constrictions provide a stripping of the hydration shell in an energetically most favorable way. With this feature it is prevented that ions stay too long in the channel. Furthermore, only specific ions are able to pass through the channels.

Transport by Ligands: Ligands, for example messenger molecules, bond to receptors of a closed ion channel and change the local structure to open the channel for specific ions to pass through.

Transport in Voltage-gated channels: In resting membrane potential, the channels are deactivated. When the potential increases, the channel opens to restore the balanced potential. The transport of ions is a passive transport because the ion flow follows the concentration gradient.