Latin intussusception (intus = inside, suscipio = capture). The invagination is characterized by the telescopic insertion of the proximal segment of the intestine into the distal segment (ie in the direction of peristalsis). mechanism MechanismInvagination causes intestinal obstruction, which combines mechanical obstruction with strangulation of the involved mesentery. The inserted section is oriented with the mucosa outwards, so the intestine has 3 walls in a given place. The outer part is called the invaginans and the inner invaginatum. It is most often ileocecal invagination (see below), other types are less common. The disease mainly affects infants between the age of six months and the second year of life. 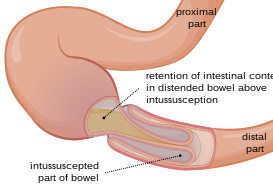 Depending on the location, there are:

In most cases, the automatic adjustment will occur. Failure to do so does not result in early intervention due to long-term pressure on the blood vessels to hyperemia (a condition in which blood flow through the veins is not allowed, leading to local accumulation), which may escalate in hemorrhagic infarction (oxygen supply in a given part of the gut is not allowed). ). intestinal wall necrosis is associated with life-threatening peritonitis.