Innate immune system, also known as non-specific, natural or native immunity, is the kind of immunity that operates constitutively in healthy person. They function by preventing entrance of microbe and in the case when microbes do succeed entering, by rapidly eliminating them.

Components of Innate Immune System and Their Roles[edit | edit source]

They also harbor intraepithelial lymphocytes that can kill pathogens and infected cells.

Started by the release of chemical mediators by injured cells, inflammation allows for the creation of a site in which the infection may be contained, preventing further dissemination of the microbe.

These mediators cause vasodilation and can also act as chemoattractant for macrophage and neutrophils. 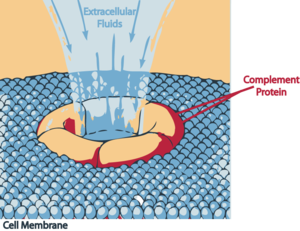 Membrane attack complex (MAC) of the complement system in action