Heart murmurs are the typical findings that accompany heart diseases. They can be caused either by the turbulent flow of the blood or by the tissue vibration. Although this sign is always unsettling, it doesn't always indicate a heart defect. If all other heart tests are normal, the heart murmur is considered "innocent". It is useful to define whether the murmur is - systolic, diastolic (in most cases pathological) or continuous. The heart murmur takes at least a quarter of the phase of the cycle (systole or diastole).

Types of the murmurs[edit | edit source]

Determination is not possible in children because of their fast heartrate.

Changes of the intensity[edit | edit source] 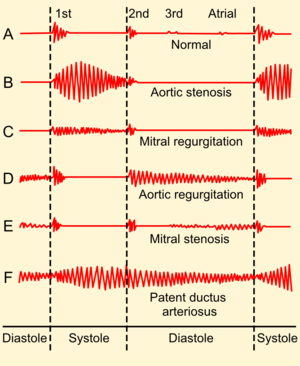 Intensity of the murmurs[edit | edit source]

Frequency of the murmurs[edit | edit source]

Ejection murmur
appears when the blood flows through the narrowed valve, doesn't take the whole systole, it begins after the first and ends before the second heart sound (crescendo-decrescendo).

Regurgitation murmur
appears in case of the valve insufficiency, it is pansystolic, the volume of the murmur remains the same the whole time.

In pediatric cardiology, these terms are not recommended because they're not typical and can stand for the other problems.

An innocent murmur is a sound that is caused by the vibrations of the heart walls during the blood flow through the ventricles and valves or through the heart's blood vessels. This murmur is harmless, it often occurs in children and disappears before the adulthood. This phenomenon is relatively common. It appears in about 80 % of the cases, an experienced pediatrician is able to recognize it easily. Innocent murmurs are systolic murmurs with short intensity, graded 1-2/6, with no propagation to anywhere. In some cases it is appropriate to use echocardiography and an electrocardiogram in order to rule out possible problems. These murmurs do not require any medication and do not indicate a heart problem. Although they mostly occur in children and then disappear, they can also be seen in adults.

This type of murmur occurs mostly in preschool-age children and toddlers. It is a low-frequency vibrating or irritating murmur that occurs in the lower sternum. It lasts a short time and resembles the rattling of strings. They change with position and are best heard lying down. Its intensity increases after exertion and weakens during Valsav's maneuver, which is a hard exhalation against closed mouths.

It is more common in school and adolescent children. This murmur is expulsive and is mostly heard in second intercostal space close to the sternum. It can be mistaken with the findings in mild pulmonary stenosis or atrial septal defect, that's why it's important to examine the second heart sound above the lungs (without splitting or clicks).

The murmur of the physiological peripheral pulmonary stenosis[edit | edit source]

We can hear it in the precordium, in the axillae and on the back, it is common in newborns and infants , up to the age of six months at the latest. It can be confused with true peripheral pulmonary stenosis and mild aortic coarctation

Most often occurs in children from three to eight years old, it is audible under the clavicles, especially on the right side. The murmur is quite, buzzing and continuous, it can cause suspicion of the patent ductus arteriosus. It is more pronounced when standing and when the head is tilted. On the contrary, the murmur disappears when the patient is lying on their back or have their heads leaning forward (or pressing the jugular vein with a finger).