WikiLectures project is revived! Motto: “A student's guide to the examiner's mind: for effective learning and proper questioning.”

Formation and detoxification of ammonia, urea cycle and its regulation, hyperammonaemia

Ammonia-NH3 is a toxic weak basic compound that needs to be detoxified and eliminated from the body. Ammonia derives from the metabolism of amino acids and especially that of gluconeogenesic transversion of amino acid into glucose. Glucose can be synthesized from amino acid carbon skeleton after the removal of its amino group. This removal of the amino group occurs through two similar processes, transamination and deamination.

Ammonia is rapidly removed from the circulation in the liver, converted into a water soluble compound known as urea. Ammonia is toxic to the CNS because it reacts with the α-ketoglutarate to form glutamate. As a consequence, the depleted levels of α-ketoglutarate impairs the function of the Citric Acid cycle in neurons, depriving them energy production. Furthermore, glutamate is a potent CNS neurotransmitter, thus any significant increase in the concentration of glutamate could have abnormal effects in synaptic transmission. 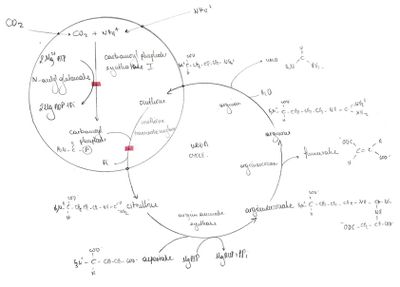 Urea cycle is regulated by the rate limiting enzyme carbamoyl phosphate synthase I, the first enzyme of the ammonia detoxification pathway. It is only active in presence of its allosteric activator N-methyl-glutamate amino acid. It catalyses the condensation of ammonium ions NH4+, CO2 and ATP to form carbamoyl phosphate, a product that will condense with L-ornithine in order to initiate the urea cycle.