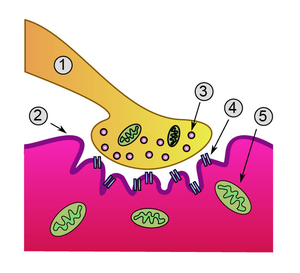 The neuromuscular junction is the site where the neuronal axon terminals (synaptic terminal) of a motor neuron come in contact with the plasma membrane of the skeletal muscle fiber (motor end plate). In reality there is no physical contact between the two membranes, but rather a small gap exists, being similarly functional to the synaptic cleft of a chemical synapse. The synaptic terminal of the neuron is of a sausage-like shape being embedded within the muscle fiber rather than lying over the the cell. The area of the muscle plasma membrane comes in relative contact with the synaptic neuronal terminal, presents a highly folded membrane forming a wavy pattern when it is cut perpendicularly to the longitudinal axis of the neuromuscular junction indicating many features of the excitation-contraction coupling of the skeletal muscle fibers. 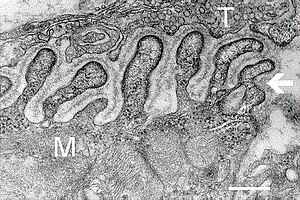 Removal of Ca2+ from the smooth muscle cell[edit | edit source]