Evidence Based Medicine, Hierarchy of evidence

Evidence based medicine (EBM) is an approach to medical practice that consists of the use of results of documented previous research in order to treat patients in the most accurate and efficient way possible. Even though modern medicine is profoundly based on empirical (scientifically proven by experiment) facts, Evidence Based Medicine extends further, rating the findings from the experiments by different measures (for example, the number of people the trial was performed on, the randomness of the testing etc.).The results of randomized controlled trials and meta-analysis will be considered the strongest, most recommended evidence to rely on, while the researches that are less credible will be case-controlled studies or experiments with an unknown origin.

The main concept of evidence-based medicine is to prove that medical practice should not be based solely on the treating physician’s personal knowledge or experience but it should be more definitely based on solid, reliable, carefully gathered evidence.

When gathering medical evidence, the method of choice is the Scientific Method. It standardizes the gathering of evidence, regardless of the type of evidence, by following a strict set of steps. The goal of this method is to test a given theory (hypothesis).

EBM guidelines are essentially documents issued by respected medical society in the particular field (e.g. American Society of Hematology) that aim to guide decisions and criteria regarding practice, diagnosis, and decisions in various clinical instances. Modern medical guidelines are based on an examination of current evidence within the format of evidence-based medicine. Continuously updated, EBM Guidelines follows the latest developments in clinical medicine and brings evidence into practice. 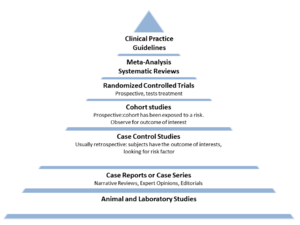 The hierarchy of medical evidence is the distinguishable levels of evidence that can be obtained through various methods, and placing them in an order based on their credibility.

Clinical trials are research studies that evaluate the efficiency of new medical approaches. A study might, for example, try to provide better ways to prevent, screen for, diagnose or treat a disease.