HOW ABOUT SOME DIAGRAMS OF CELLULAR ACTION POTENTIALS?

What is Electrical Activity?

Electrical activity is the study of the electrical properties of biological cells, tissues and organs. It includes measurements of change in voltage or electric current on a far-ranging variety of scales from single ion channel proteins to entire organs like the heart.

Nerve Impulses- Electricity in the body

Human electrical energy is generated by chemical processes in nerve cells. Billions of nerve impulses travel throughout the human brain and nervous system. A nerve impulse is a wave of electrical activity that passes from one end of nerve cell to another. Each impulse is the same size that carries information about the intensity of the nerve signal. Neurons, basic unit of nervous system, are responsible for sending, receiving, and interpreting information from all parts of the body.

Our body is a complex and carefully-balanced superhighway of cells, tissues and fluids that direct an incomprehensible array of electrical impulses almost every second. This is only possible due to a homeostatic environment where electricity is well conducted to carry the signals to their intended destinations. They key to maintaining this conductive superhighway lies within the ELECTROLYTES. Electrolytes regulate our nerve and muscle function, our body’s hydration, blood pH, blood pressure and the rebuilding of damaged tissues. Various mechanisms exist in our body that keep the concentrations of different electrolytes under strict control.

One of the simplest physiological units is the cell. It has the power of maintaining itself alive given suitable surroundings. The endocrine pancreas consists of clusters of cells called islets of Langerhans. Most of the cells in an islet are insulin-secreting β-cells. Electrical impulses or action potentials are generated in bursts when the bath or blood glucose level is in the stimulatory range. Insulin insufficiency is generally a result of β-cell damage by autoimmunity. Closing adenosine triphosphate (ATP)-sensitive K+ channels (KATP) in response to glucose increase is generally considered the initial event that depolarizes the β-cell membrane and activates the voltage-dependent Ca2+ channels, which triggers the release of insulin. However, glucose is unable to extract insulin release if electrical activity and the accompnying Ca2+ influx are prevented. Thus beta-cell electrical activity is a key element in the series of steps culminating in glucose-induced insulin secretion.

Brain - an organ of soft nervous tissue contained in the skull of vertebrates, functioning as the coordinating centre of sensation, intellectual and nervous activity. Human brain cells fire electrical impulses to communicate with one another. Ion channels located in the membranes, some with calcium and some with potassium, work in sync to deliver messages throughout the brain. Within a single neuron, information is conducted through electrical signaling. When a neuron is stimulated, an electrical impulse, called an action potential, moves along the neuron axon. Action potential then enables signals to travel very rapidly along the neuron fiber. When large numbers of neurons show synchronized activity, the electric fields generated can be large enough to detect outside the skull, using Electroencephalography (EEG) or Magnetoencephalography (MEG).

Heart - a hollow muscular organ that pumps blood through the circulatory system by rhythmic contraction and dilation. The heart’s pumping action depends on the rhythmic, coordinated contraction of the ventricles and the proper functioning of the valves. Each mechanical heartbeat is triggered by an action potential which originates from a rhythmic, pacemaker cell within the heart. The impulse is then conducted rapidly throughout the organ in order to produce coordinated contraction. The action potential of a cardiac muscle starts from more negative resting membrane potential (-90mv), it has rapid depolarization phase ( phase 0) due to opening of fast Na+ voltage gated channels , partial repolarization ( phase 1) due to opening of Cl- Channels and/or some K+ channels , (phase 2) the plateau phase which is due to opening of slow Ca+2 channels, (phase 3) the repolarization phase due to opening of K+ voltage gated channels, and (phase 4) is the coming back to the resting membrane potential . 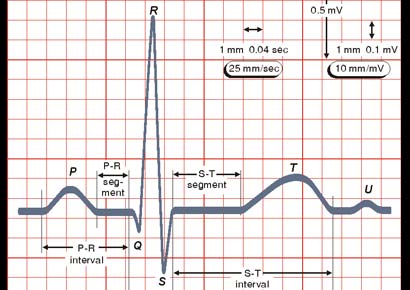 EEG is an electrophysiological monitoring method to record electrical activity of the brain over a period of time. It measures voltage fluctuations resulting from ionic current within the neurons of the brain. In clinical contexts, EEG refers to the recording of the brain's spontaneous electrical activity over a period of time. It has also been shown to be useful for locating tumors. With every good thing comes a bad. EEG causes low spatial resolution on the scalp, and unlike PET and MRS, it cannot identify specific locations in the brain at which various neurotransmitters, drugs, etc can be found.

The electrocardiogram (ECG or EKG) is a noninvasive test that is used to reflect underlying heart conditions by measuring the electrical activity of the heart as line tracings on paper. A natural electrical system causes the heart muscle to contract. This pumps blood through the heart to the lungs and the rest of the body. It is done to check the heart's electrical activity or find the cause of unexplained chest pain or pressure.

Bioelectricity has many effects other than the hazards discussed here. Devices such as pacemakers and defibrillators have saved countless lives. The measurement of the electrical characteristics and electrical activity of the human body have proved essential in ECG, EEG and other techniques. The uses of electricity and electromagnetic effects in healthcare are immense and are only going to grow in the future.