Sonongraphy, also sometimes called ultrasound scanning is a safe, painless and non-invasive imaging technique which involves the use of high frequency sound waves to produce real time images of internal organs, tissues and bloodflow in the body. During this process, high frequency sound waves of between 1-5 MHz are transmitted into the body using a transducer, the sound waves are reflected by the tissues being examined back to the same transducer, which then relays the message to the ultrasound machine. The machine is able to interprete this data by calculating the distance between the transducer and the tissues using the speed of sound in soft tissue (1,540 m/s) and the time taken for the echo to return; this enables a two-dimensional image to be formed.

The Doppler-Sonography is a special type of Sonography that enables the physician to display the VELOCITY of bloodflow in blood vessels and the heart in acoustic and visual qualities using the Doppler effect of soundwaves. The Doppler effect is simply the observed change in frequency when relative motion exists between the source of a sound wave and the observer. For example, the change in pitch when an ambulance zooms past a pedestrian on the street (For further explanation, see article on Doppler effect). In Doppler Sonography it is still necessary to use the method of usual Sonography to find the target structure. The target structures of Doppler Sonography need to be vessels or the heart since a moving object or fluid (in this case blood) is required to create the Doppler effect. Common examined organs or tissues are for instance the common carotid artery, the heart and also the vessels of the brain. Nowadays, modern medical ultrasound device can use Doppler Sonography in order to evaluate the bloodflow of the visualized structures. Because Doppler-Sonography is fast, relatively cheap, and non-invasive it has become essential in the diagnosis of vessels in various areas of medicine such as internal medicine, gynaecology, angiology and cardiology. In this part of the article we are going to discuss in detail how the Doppler effect is applied to the medical ultrasound device. [1]

In Sonography, the Doppler effect works slightly different compared to the example provided above as the blood does not emit any sound but rather reflects the soundwaves produced by the transducer. Through the reflection of the sound waves by the erythrocytes and their movement due to blood flow the blood behaves like a moving source of sound. Due to the fact that echoes from stationary tissues undergo little to no changes in frequency, the only detectable changes are those produced by the flow of blood. These differences are measured in terms of a frequency shift (Doppler shift). The measured velocities can be imaged to produce a colour flow display. 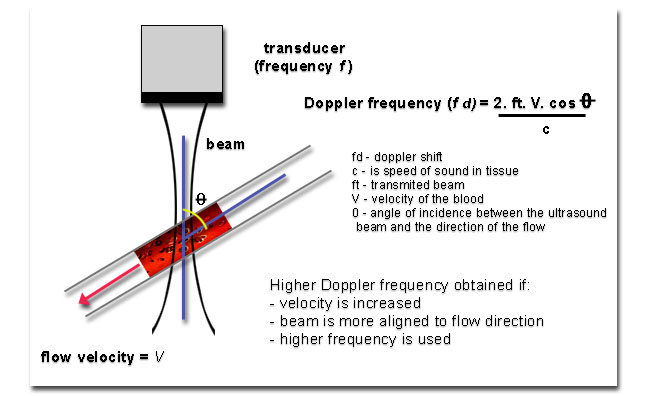 The above diagram shows the formula on which the entire principle of Doppler sonography is based. It shows that the Doppler frequency shift is determined by four main factors: When a physician is trying to examine a vessel via Doppler sonography, it is of utmost importance to take the beam-flow angle into consideration as the Doppler effect is dependent on the position of the receiver to the source of sound. As shown in the picture with the ambulance we obtain either a much higher frequency when movement of the source of sound is towards the receiver or a much lower frequency when the movement of the source of sound is away from the receiver. Therefore, the optimal value for the Doppler effect would be at 180° or 0° to the source of sound. Now, imagine the observer of the ambulance is standing at 90° to the driving ambulance. The waves the receiver is hearing now are neither of a higher nor a lower frequency which means there is no Doppler effect. This relation is expressed in the formula through cos θ. The cosine of 0° and 180° is 1 and -1. The cosine of 90° is 0. Hence, the optimal angle of incidence or beam-flow angle is fixed between 0°- 60° or 120°-180°. In both cases, the Doppler signal is high enough to measure an accurate value for the velocity of blood. Through the angle of incidence, the device is able to display different directions of blood-flow, as opposite directions of flow would have the same magnitude but either a positive (cos 0°-60° > 0) or a negative (cos 120°-180°< 0) value as the angle is inverted with changing direction. Varying among ultrasound devices, blood flowing towards the transducer is colored differently (usually blue) from blood flowing away from it (usually red). This is an additional method to distinguish between arteries and veins.

The diagram below illustrates the effect of the Doppler angle on the frequency displayed by the sonogram: 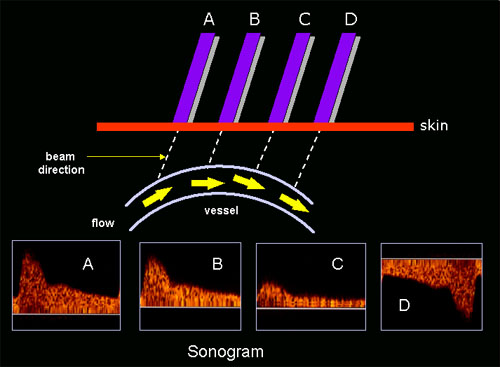