Development of the Respiratory System

When the embryo is approximately 4 weeks old , the respiratory diverticulum (lung bud) appears as an outgrowth from the ventral wall of the foregut. An increase in retinoic acid causes upregulation of the transcription factor TBX4 that will induce formation of the bud, growth and differentiation of the lungs. The epithelium of the internal lining of the larynx, trachea, bronchi and lungs is entirely of endodermal origin. The cartilagenous, muscular and connective tissue of trachea and lungs are derived from splanchnic mesoderm. 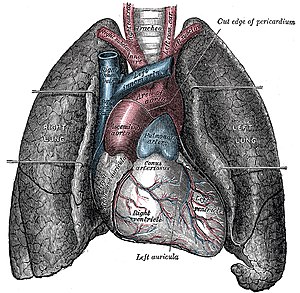 The lung bud forms the trachea and two lateral outpockets - bronchial buds that will form the right and left main bronchi. In the lungs the mesoderm which covers the outside of the lung will give rise to visceral pleura; the somatic mesoderm layer which covers the body wall from the inside will become the parietal pleura. The pleural cavity is the space between the parietal and visceral pleura. 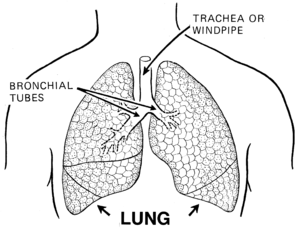 Maturation of the lungs[edit | edit source]

At birth Lung fluid is reabsorb but not the surfactant coat. The surfactant prevents the collapse of the alveoli durind expiration.