Note: electric shock is also used to version some arrhythmias that do not acutely endanger the patient's life (eg atrial fibrillation).

The study of fibrillation and defibrillation began to develop in the 19th century. It was then found that fibrillation could be induced by the action of alternating current on the heart. In 1899, physiologists Prevost and Batelli discovered that a stronger DC electric shock would stop fibrillation, and then a sinus rhythm appeared. Unfortunately, this discovery did not receive enough attention, but was later confirmed and investigated in many countries.

The first life-saving defibrillation was performed by thoracic surgeon Claud S. Beck in 1947. Thanks to this success, this method was adopted and the foundations of clinical defibrillation research were laid.

Discharge energy is given in joules (E [J] = U [hundreds of volts] · I [tens of amperes] · t [units up to tens of milliseconds]) [2]. According to current recommendations, the first discharge should have an energy of 360 J when using monophasic devices and 150 J in the case of biphasic devices [3].

Defibrillators are manufactured in the form of

Some devices combine the features of manual and automated defibrillators, allowing external pacing, monitoring ECG, saturation, and the like.

Manual external defibrillators are used primarily in hospitals, outpatient clinics, and emergency medical service trips. Thanks to the battery power supply, portable versions can be used to advantage (see picture above). Their use is reserved for physicians who decide on the appropriateness of defibrillation.

They consist of a base and a pair of electrodes (slang for "paddles", usually marked according to the target position "sternum" and "apex"). The base has controls for setting the required energy in joules, charging and delivering the shock. The electrode handles can have power selection controls and discharge buttons. Electrodes tend to be reduced to a pediatric size.

Approximately 40% of all cardiac arrest is accompanied by ventricular fibrillation or tachycardia [3]. The physician called in can often only notice asystole, so the idea of ​​automated defibrillators has arisen where the patient receives a shock at a time when fibrillation has not yet progressed to asystole.

These defibrillators are designed so that every layman can work with them after a short training. The rescuer opens the device and he guides him through the whole action with instructions on the display or by voice. It has a programmed algorithm according to which rescuers advise what to do. The rescuer sticks electrodes to the patient's chest, the device analyzes his rhythm and recommends or does not recommend the delivery of a shock. The instruments have very high sensitivity and specificity.

AEDs are deployed in places with a high density of people (shopping malls, airports) and where medical assistance is not immediately available (aircraft). They are also located in the homes of at-risk patients. In some countries, defibrillators are also available on the street. 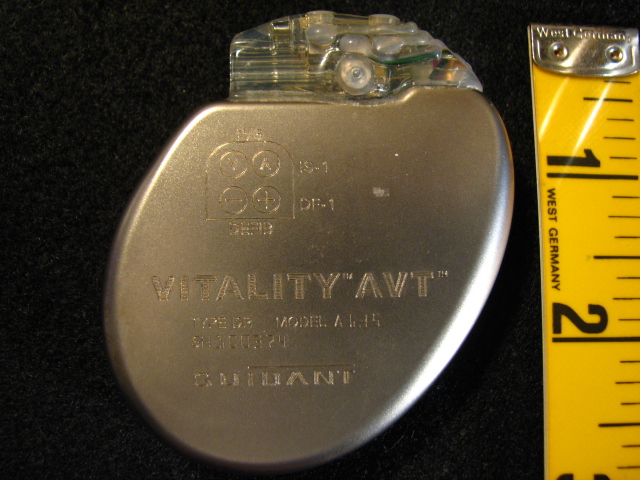 These devices are operated on patients at risk of sudden cardiac death in a manner similar to pacemakers. They constantly monitor the patient's heart rate and send a shock if they detect a malignant arrhythmia. During this, the patient feels a certain discomfort. The devices register these events and it is possible to study them later on a computer.

Defibrillation can be performed either 'directly' (during open heart surgery or implantable defibrillators), or indirectly (with electrodes applied to the chest surface using higher energy). The electrodes are placed on the chest in standard positions: most often to the right under the right clavicle and to the left to approximately the 5th intercostal space in the middle axillary line. [3] Before use, the electrodes are coated with a suitable gel or (this does not apply in the case of adhesive electrodes). No one should touch the patient during the shock due to the risk of electric shock. During electrical cardioversion, the shock is synchronized with the R-wave according to ECG.