Every computer is composed of two basic components: hardware and software. 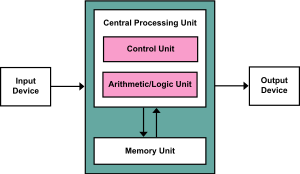 An application software is a computer program designed to perform a group of coordinated functions, tasks, or activities. Examples of an application include a word processor, a spreadsheet, an accounting application, a web browser, a media player or a console game[1]. Applications may be connected with the computer and its system software or may be published separately, and may be coded as proprietary or open-source.

Central processing unit. Unit that bring the instruction from memory to be executed and decodes.

It stands for random access memory, it keeps the data and general purpose program that the compter is executing at the moment. RAM is not permanent, its contain can be changed and it is erased when the computer is off.

It is the physical arrangement in a computer that contains the computer's basic circuitry and components. It has a socket for the CPU, RAM and expansion part (sound cards, graphic cards ETC) and also connects together the CPU, memory, hard drives, optical drives, video card and more.

Bit is the smallest storage unit in the computer. A bit can store just 0 or 1, which is called binary, and therefore can be stored by physical devices or systems that has two separate states. For example 2 positions, or states of an electrical switch, the two states being ‘on‘ and ‘off‘. A bit can also be described as true/ false, no/ yes etc. Notice that a bit has only two coding options, or 2 values. One bit is too small to be used, and thus computers use a larger storage unit called bytes.

Bytes- are made of bits. 8 bits are used to create 1 byte. Notice that a Byte has 28 coding options, 256 values. RAM, hard drives and flash drives, are all types of storages measured by Bytes.

is any set of characters that has been gathered and translated for some purpose, usually analysis. It can be any character, including text and numbers, pictures, sound, or video. If data is not put into context, it doesn't do anything to a human or computer. Within a computer's storage, data is a collection of numbers represented as bytes that are in turn composed of bits.

a meaning change data into information. For instance letter A, is only a data for an illiterate person but an information for someone who can read.

is a familiarity, awareness or understanding of someone or something, such as facts, information, descriptions or skills, which is acquired through experience or education by perceiving, discovering, or learning. Knowledge can refer to a theoretical or practical understanding of a subject.

is a procedure or formula for solving a problem, based on conducting a sequence of specified actions. A computer program can be viewed as an elaborate algorithm. In mathematics and computer science, an algorithm usually means a small procedure that solves a recurrent problem.