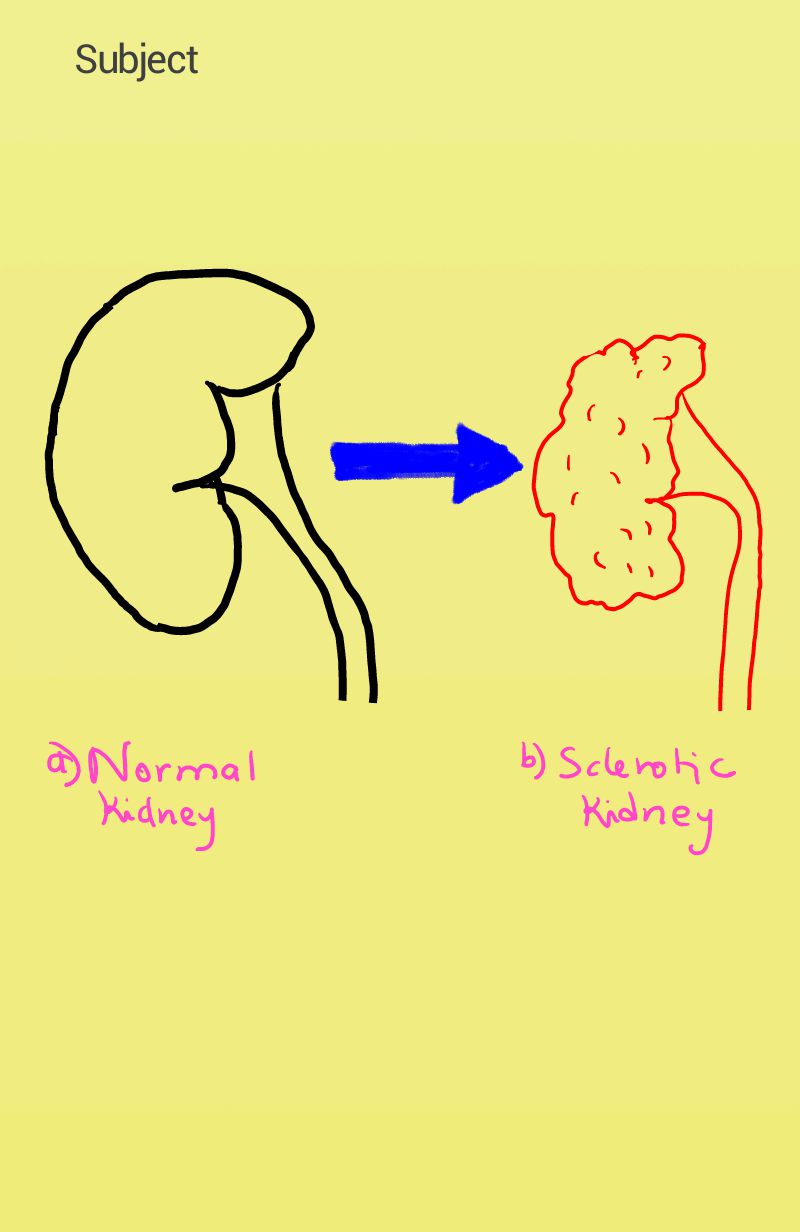 Due to the nephron loss, chronic renal failure constitutes a graduated reduction in renal clearance or glomerular filtration rate (GFR). This culminates in the accumulation of urea and other chemicals in the blood that otherwise should have been filtered out of the body. There is no stardard definition of chronic renal failure. The Kidney Disease Improving Global Outcomes (KDIGO) has denoted a GFR of <60 mL/minute/1.73 m2 as an indication of chronic kidney disease. This correlates to serum creatinine concentration >137 micromol/L in men and >104 micromol/L in women. KDIGO also distinguishes people with low GFR as thus: GFR 30 mL/minute to 60 mL/minute as stage 3 ; GFR 15 mL/minute to 30 mL/minute as stage 4; and GFR <15 mL/minute or dialysis stage as stage 5 . The denotion of chronic renal failure usually does not comprise people treated with dialysis or transplantation, whom end-stage renal disease (ESRD) is applied.

In chronic renal failure, an increase in nitrogenous wastes is regarded as azotemia and uremia. In Azotemia there is increased BUN at 30-35% of GFR. Azotemia is an elevation of blood urea nitrogen (BUN) (reference range, 8-20 mg/dL) and serum creatinine (normal value, 0.7-1.4 mg/dL) level. Uremia occurs at <20% normal excretory capacity. Uremia is caused by accumulation of nitrogenous wastes, hightened intracellular Na+ and water, decreased intracellular K+, lowered levels of hormones and other chemical mediators produced by the kidney. Uremia results in a decrease in basal body temperature (could be due to decreased activity of Na+/K+ ATPase activity as these accumulate in the cell), impaired glucose metabolism, and decreased lipoprotein lipase activity with an increased disposition to atherosclerosis. Uremia results in suppressed immunity because of leukocytic suppression by uremic contaminats. About 25% of patients with uremia have peptic ulcer disease maybe due to secondary hyperparathyroidism. Women with uremia possess low estrogen levels resulting in amenorrhea and a problem with maintaining a pregnancy. With men, there is a decreased testosterone level which may result in impotence.

The reuptake of Na+ and water is obstructed in renal failure. The extracellular volume increases and results in hypervolemia. This leads to formation of edemas, most importantly pulmonary edema. Congestive heart failure is also precipitated due to increased volume and salt overload. An increase in the intracellular concentration of Na+ also impairs 3Na+/Ca2+ exchange and results in increased Ca2+ which leads to depolarization of cells. There is abnormal neuromuscular excitability, cellular increase of Cl- and cytomegaly.

Reduced renal production of calcitriol will lead to hypocalcemia as it enhances the absorption of calcium and phosphate from the gut. Coupled with an impaired renal excretory mechanism for phosphate, hyperphosphatemia results. at high solubilities, phosphate combines with with Ca2+ and forms calcium phosphate which is then deposited in the joints and skin causing joint pains or pruritus respectively. As creating this complex reduces concentrations of Ca2+, Parathyroid hormone release is enhanced and thus takes calcium phosphate from bone resulting in osteomalacia or osteopenia.

Metabolic acidosis (plasma HCO3- content 15 to 20 mmol/L) occurs as the kidneys are unable to secrete the acids and produce buffers. Renal anemia resulting from impaired renal production of the hormone erythropoietin is common and is of the normochromic-normocytic type.

Chronic renal failure is due to diabetic nephropathy, hypertensive nephroangiosclerosis and different primary and secondary glomerulopathies. Metabolic syndrome which is characterized by hypertension and type II diabetes concurrently occuring, is also a causative factor.

Anorexia, nausea, vomiting, nocturia, fatigue and lowered mental perception are the earliest presentations of the presence of uremia. As the disease progresses, neuromuscular symptoms can occur, stomatitis, and an unpleasant taste in the mouth. The skin may be yellow-brown due to the accumulation of various toxins in the body. Sometimes, urea in sweat crystallizes on the skin forming a uremic frosty appearence. Pruritus is common as well. As the disease progresses, pericarditis and GIT ulceration and bleeding are often seen.