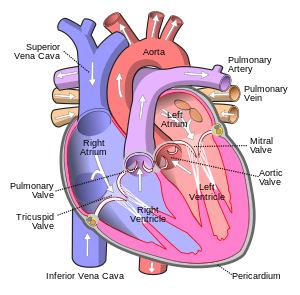 Bradycardic disorders are caused either by a disorder in the sinus node or by a blockage of the conduction of excitement from the atria to the ventricles. The most common is sinus bradycardia.

This is a slowing of the heart rate <60 / min. Physiologically, it occurs in situations where vagal activity predominates (sleep). Normally, this kind of value can be found in athletes, in which it reaches 40 beats per minute. Possible causes include for example: hypothyroidism, hypothermia, intracranial hypertension, Myocardial Infarction of the lower wall, sick sinus syndrom. It is also often induced iatrogenically by Beta-blockers, verapamil, digitalis or amiodaron.

It is a permanent or paroxysmal sinus bradycardia, until the sinus arrest. It can be alternated with flutter / atrial fibrillation . Excitement disorder occurs, which may be functional / anatomical and transient / permanent.

Most patients are asymptomatic. Otherwise they experience palpitations, dizziness, confusion, pre-syncopies, syncope and they can also suffer from a lower minute cardiac output.

On the ECG we observe a slow or irregular sinus action, various surrogate rhythms or, conversely, paroxysms of tachycardia.The negative effect of the autonomic nervous system confirms the ability of the sinus node to increase heart frequency during exercise (confirmed by ergometry). Holter ECG shows the variability of heart frequency during the day and night, episodes of sinus pauses or the occurrence of other severe arrhythmias.

Asymptomatic patients do not require treatment. In bradycardia with a hemodynamic disorder, we indicate a pacemaker implantation.

This is an outage of various lengths in the SA node. With a longer pause, junctional or idioventricular contraction may occur. It may be clinically manifested bt syncope.

It has three degrees, but only the III. degreeis clinically significant. In this case, a pulse is not transferred from the sinus node to the atrial myocardium → loss of a single heartbeat. The entire P-QRS-T complex is missing from the ECG.

This is a disorder in the transfer of the depolarization wave to the ventricules. Blockade is most often in the AV node (suprahisally), but can also occur in the His bundle (intrahisally) or infrahisally.

Prolonged AV conduction of excitement, therefore PQ> 0.2 s. Carditis in acute rheumatic fever , digoxin intoxication, β blockers. Clinically insignificant, it must be taken into account when medicating with the above drugs.

With each excitation transmitted, the disorder escalates and the conduction time of the excitation from the atria to the ventricles increases. Eventually, the conduction failure escalates so that the excitement from the atria to the ventricles is not transferred. A temporary complete blockage of the AV transfer occurs. Failure to convert the excitement will allow the transmission system to "recover" and resume the AV transmission. This process repeats periodically. The interval from one complete AV block to another complete AV block is called the Wenckebach period.

The fixed Wenckebach period , unlike Mobitz II AV block , is not a clear indication for pacemaker implantation. The exception is symptomatic bradycardia in a fixed Wenckebach period. For example, if the patient's SA node frequency drops to 60 / min, then with AV conversion 2: 1, the QRS and ventricular systolic frequency will be 30 / min, and this will usually cause a significant decrease in cardiac output. If the SA node function is OK, the sympathetic system resolves the 2: 1 AV block by stimulating the SA node to a higher node rate, such as 120 / min to maintain a QRS (ventricular systole) rate of 60 / min.

The lesion in the transmission system is located predominantly in the AV node, less often in the His bundle . The location of the disorder cannot be determined from the surface ECG, but only by invasive electrophysiological examination.

At normal heart rate, the damaged area fails to transfer all control pulses from the AV node to the ventricles. Each converted pulse induces a complete blockage of the AV transmission (both Tawara branches do not conduct). Místo poruchy potřebuje určitou dobu na zotavení k tomu, aby mohlo dojít k dalšímu A-V převodu.The fault location needs some recovery time for further AV conversion to occur. At the mildest degree of disturbance, the control pulses from the supraventricular region are converted to chambers in a 2: 1 ratio (PP-QRS). At a higher degree of failure, the AV conversion ratio increases to 3: 1, 4: 1, etc. As the Tawar arm progresses, it completely stops the excitement and a complete III ° AV block occurs (there is a conduction block in both Tawar arms).

This type of AV block is unstable and usually progresses to a complete III ° AV block with ventricular bradycardia, or worse, asystole and syncope (Adams-Stokes syndrome). Therefore, the finding of Mobitz II on the ECG is very important and is an indication for the patient to be placed on a monitored bed and for early implantation of a pacemaker. For the above reasons, the name Mobitz II should not be used for AV block with a 2: 1 ratio and QRS complex shorter than 0.12 s. , verapamil or diltiazem, digoxin), hyperkalaemia and hypothyroidism. About 20% of patients with 2: 1 AV block have an intermittent His-bundle lesion and a pre-existing permanent conduction block in one of the Tawar arms (PP-QRS ...; and QRS wider than 0.12 s). In terms of lesion location, it is a fixed Wenkebach period with AV transmission 2: 1 and this disorder usually does not have the risk of significant bradycardia as AV block Mobitz II °. However, these disorders cannot be distinguished from normal ECG recording. In both cases, the QRS complex will be wider than 0.12 s, each QRS complex will be preceded by 2 P waves and the PQ interval will be constant.

There is a larger number of P waves per QRS complex on the ECG (PP-QRS… PPP-QRS… PPPP-QRS). The PQ interval is constant (ventricles are controlled from the supraventricular area and if it is the SA node the sinus rhythm remains. QRS is wider than 0.12 s (there is a ventricular conduction defect - blockage of the Tawara branch).

In 80% of these disorders, the lesion in the transmission system is located in one of the Tawara branches . The lesion is distal to the bifurcation of His's bundle in a situation where the second Tawara branch does not conduct at all (at the same time a complete blockage of conduction in the contralateral Tawara branch).

Permanent complete AV block. None of the supraventricular excitations reach the ventricules.

It occurs either as progression of a Mobitz II ° blockade or by sudden damage to the conduction system, for example in acute myocardial infarction.

AV block III ° with ventricular rhythm is a clear indication for pacemaker implantation. Implantation is postponed in reversible causes of AV conduction block (acute diaphragmatic myocardial infarction, bradycardic drugs, hyperkalemia, hypothyroidism, infectious endocarditis). In contrast, pacemaker implantation is not postponed in the onset of III ° AV block in acute anteroseptic myocardial infarction. Severe bradycardia usually does not occur in III ° AV blocks with a QRS complex shorter than 0.12 s (40% of AV blocks) (the alternative ventricular control center is supraventricular). If the surrogate center has a frequency greater than 40 rpm, this complete AV block is not an indication for pacemaker implantation.

P waves appear on the ECG independently of QRS complexes wider than 0.12 s (there is a junctional or idioventricular rhythm, usually SF <40 / min). There is AV dissociation in which P waves have a higher frequency than QRS complexes.

In 61% of all III ° AV blocks, the lesion is located in one of the Tawara branch with the current previous conduction block in the contralateral Tawara branch..