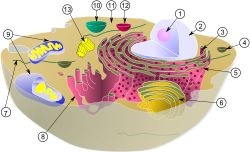 Cytosol, the major constituent of the intracellular compartment shown at number 11

The intracellular compartment accounts for 28 L, the 2/3 of the total body weight. The intracellular fluid refers primarily to the fluid that is bound within the cellular plasma membrane called the cytosol. Besides cytosol however, there is also a small amount of fluid inside the cell that is not bound within the plasma membrane but rather by the organelle membrane. For example all the membranous organelles including the nucleus which surrounded by the phospholipid bilayer also contains fluid. Since each membrane bound compartment has different function between one another, the concentration and the composition of the intracellular fluid is also different and heterogeneous even within one cell.

Blood plasma is the non cellular portion of blood that consists of 98% of water, electrolytes and proteins. It accounts for the 55% of the total blood volume and averages between 2.5 and 3 L in each body. 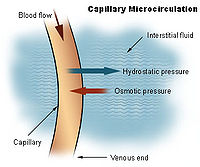 Interstitial fluid is a solution that bathes and surrounds the cells of the body. It is the site where exchange of nutrients and metabolites occurs between cells and capillaries.