There has been a variety of atomic models throughout history of atomic physics, that refers mainly to a period from the beginning of 19th century to the first half of 20th century, when a final model of atom which is being used nowadays (or accepted as the most accurate one) was invented. Although the awareness of atom existence goes way back to the antique period of the world history (Greek conception of atom), this article will be mainly about five basic atomic models, from which each one has somehow contributed to how we percept the structure of atom itself - Dalton´s Billiard Ball Model, J.J Thomson's "plum pudding" model, Rutherford's Planetary model, Bohr's Atomic model, Electron Cloud Model/Quantum Mechanics Model. Ilustration of Dalton's perception of atom

John Dalton was an English scientist, who came up with an idea that all matter is composed of very small things. It was the first complete attempt to describe all matter in terms of particles. He called these particles atoms and formed an atomic theory. In this theory he claims that:

Parts of his theory had to be modified based on the discovery of subatomic particles and isotopes. We now also know that atoms are not indivisible, because they are made up of neutrons, electrons and protons.

Ilustration of Thomson's perception of atom

After discovery of an electron in 1897, people realised that atoms are made up of even smaller particles. Shortly after in 1904 J. J. Thomson proposed his famous “plum pudding model“. In this model, atoms were known to consist of negatively charged electrons, however the atomic nucleus had not been discovered yet. Thomson knew that atom had an overall neutral charge. He thought that there must be something to counterbalance the negative charge of an electron. He came up with an idea that negative particles are floating within a soup of diffuse positive charge. His model is often called the plum pudding model, because of his similarity to a popular English dessert.

Rutherford was first, who suggested that Thomson’s plum pudding model was incorrect. His new model introduces nucleus to the atom theory. Nucleus contains relatively high central charge concentrated into very small volume. This small volume also contains the bulk of the atomic mass of the atom. Nucleus is surrounded by lighter and negatively charged electrons. His model is sometimes known as the planetary model of the atom. However, there were still some major problems with this model. For example Rutherford could not explain why atoms only emit light at certain frequencies. This problem was solved later by a Danish physicist Niels Henrik David Bohr.

Bohr model describes the atom as a positively charged nucleus, which is surrounded by electrons. Electrons travel in circular orbits, attraction is provided by electrostatic forces. Normally occupied energy level of the electron is called the ground state. The electron can move to the less – stable level by absorbing energy. This higher – energy level is called excited state. The electron can return to its original level by releasing the energy. All in all, when electron jumps between orbits, it is accompanied by an emitted or absorbed amount of energy (hv).

Quantum Mechanics Model of Atom is nowadays being taught as the most "realistic" atomic model that describes atomic mechanisms as how present science presumes they work. It came to exist as a result of combination of number of scientific assumptions:

Quantum mechanics physics propose that electrons are moving around the nucleus not on specifically defined electron paths (as we have seen eg. in Rutherford's planetary atomic model), but in a certain three dimensional space (atomic orbital), in which their own occurrence has a certain probability, meaning their position cannot be calculated with 100% accuracy.

Four numbers, called quantum numbers, were introduced to describe the characteristics of electrons and their orbitals. Based on knowledge of quantum numbers, we are now able to build an electron configuration of an atom that describes electron arrangement in an atom. Apart from Pauli exclusion principle, there are 2 other rules that we must follow: 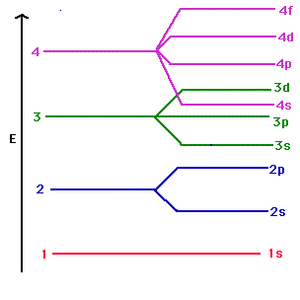 Basic ilustration of the Aufbau principle 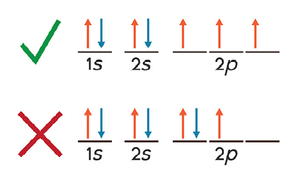 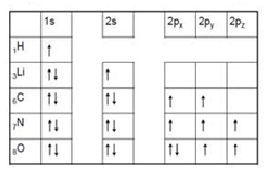 The importance of quantum mechanical atomic model has 2 main aspects. First, being able to build an electron structure of atoms of specific substances helps us to understand how the atoms interact in molecules, therefore we are one step closer to a more detailed description of attributes of those substances. Second, it leaves an open door to more potential theories which could expand our knowledge and perception of the world and universe surrounding us.