Rx only
For Intravenous or Intramuscular Administration.

The structural formula is represented below: 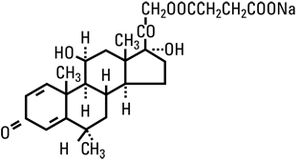 Methylprednisolone sodium succinate is so extremely soluble in water that it may be administered in a small volume of diluent and is especially well suited for intravenous use in situations in which high blood levels of methylprednisolone are required rapidly.

A-Methapred is available in several strengths and packages for intravenous or intramuscular administration.

When necessary, the pH of each formula was adjusted with sodium hydroxide so that the pH of the reconstituted solution is within the USP specified range of 7 to 8 and the tonicities are, for the 40 mg per mL solution, 0.50 osmolar; for the 125 mg per 2 mL, 0.40 osmolar; (Isotonic saline = 0.28 osmolar).

IMPORTANT− Use only Bacteriostatic Water For Injection with Benzyl Alcohol when reconstituting A-Methapred.

Use within 48 hours after mixing.

Methylprednisolone sodium succinate has the same metabolic and anti-inflammatory actions as methylprednisolone. When given parenterally and in equimolar quantities, the two compounds are equivalent in biologic activity. The relative potency of A-Methapred sterile powder and hydrocortisone sodium succinate, as indicated by depression of eosinophil count, following intravenous administration, is at least four to one. This is in good agreement with the relative oral potency of methylprednisolone and hydrocortisone.

When oral therapy is not feasible, and the strength, dosage form and route of administration of the drug reasonably lend the preparation to the treatment of the condition, A-Methapred sterile powder is indicated for intravenous or intramuscular use in the following conditions:

As adjunctive therapy for short-term administration (to tide the patient over an acute episode or exacerbation) in:

During an exacerbation or as maintenance therapy in selected cases of:

Control of severe or incapacitating allergic conditions intractable to adequate trials of conventional treatment in:

Severe acute and chronic allergic and inflammatory processes involving the eye, such as:

To tide the patient over a critical period of the disease in:

For palliative management of:

The use of A-Methapred sterile powder is contraindicated in premature infants because the reconstitution diluent contains benzyl alcohol. Benzyl alcohol has been reported to be associated with a fatal “Gasping Syndrome” in premature infants. A-Methapred sterile powder is also contraindicated in systemic fungal infections and patients with known hypersensitivity to the product and its constituents.

In patients on corticosteroid therapy subjected to any unusual stress, increased dosage of rapidly acting corticosteroids before, during, and after the stressful situation is indicated.

Corticosteroids may mask some signs of infection, and new infections may appear during their use. There may be decreased resistance and inability to localize infection when corticosteroids are used.

Prolonged use of corticosteroids may produce posterior subcapsular cataracts, glaucoma with possible damage to the optic nerves, and may enhance the establishment of secondary ocular infections due to fungi or viruses.

Usage in pregnancy. Since adequate human reproduction studies have not been done with corticosteroids, the use of these drugs in pregnancy, nursing mothers, or women of child-bearing potential requires that the possible benefits of the drug be weighed against the potential hazards to the mother and embryo or fetus. Infants born of mothers who have received substantial doses of corticosteroids during pregnancy should be carefully observed for signs of hypoadrenalism.

Average and large doses of cortisone or hydrocortisone can cause elevation of blood pressure, salt and water retention, and increased excretion of potassium. These effects are less likely to occur with the synthetic derivatives except when used in large doses. Dietary salt restriction and potassium supplementation may be necessary. All corticosteroids increase calcium excretion.

The use of Methylprednisolone Sodium Succinate for Injection, USP sterile powder in active tuberculosis should be restricted to those cases of fulminatingor disseminated tuberculosis in which the corticosteroid is used for the management of the disease in conjunction with appropriate antituberculous regimen.

If corticosteroids are indicated in patients with latent tuberculosis or tuberculin reactivity, close observation is necessary as reactivation of the disease may occur. During prolonged corticosteroid therapy, these patients should receive chemoprophylaxis.

Because rare instances of anaphylactic (eg, bronchospasm) reactions have occurred in patients receiving parenteral corticosteroid therapy, appropriate precautionary measures should be taken prior to administration, especially when the patient has a history of allergy to any drug.

There are reports of cardiac arrhythmias and/or circulatory collapse and/or cardiac arrest following the rapid administration of large IV doses of Methylprednisolone Sodium Succinate for Injection, USP (greater than 0.5 gram administered over a period of less than 10 minutes). Bradycardia has been reported during or after the administration of large doses of Methylprednisolone sodium succinate, and may be unrelated to the speed or duration of infusion.

Persons who are on drugs which suppress the immune system are more susceptible to infections than healthy individuals. Chicken pox and measles, for example, can have a more serious or even fatal course in non-immune children or adults on corticosteroids. In such children or adults who have not had these diseases, particular care should be taken to avoid exposure. How the dose, route and duration of corticosteroid administration affects the risk of developing a disseminated infection is not known. The contribution of the underlying disease and/or prior corticosteroid treatment to the risk is also not known. If exposed to chicken pox, prophylaxis with varicella zoster immune globulin (VZIG) may be indicated. If exposed to measles, prophylaxis with pooled intramuscular immunoglobulin (IG) may be indicated. (See the respective package inserts for complete VZIG and IG prescribing information.) If chicken pox develops, treatment with antiviral agents may be considered.

Drug-induced secondary adrenocortical insufficiency may be minimized by gradual reduction of dosage. This type of relative insufficiency may persist for months after discontinuation of therapy; therefore, in any situation of stress occurring during that period, hormone therapy should be reinstituted. Since mineralocorticoid secretion may be impaired, salt and/or a mineralocorticoid should be administered concurrently.

There is an enhanced effect of corticosteroids on patients with hypothyroidism and in those with cirrhosis.

Corticosteroids should be used cautiously in patients with ocular herpes simplex because of possible corneal perforation.

The lowest possible dose of corticosteroid should be used to control the condition under treatment, and when reduction in dosage is possible, the reduction should be gradual.

Aspirin should be used cautiously in conjunction with corticosteroids in hypoprothrombinemia.

Steroids should be used with caution in nonspecific ulcerative colitis, if there is a probability of impending perforation, abscess or other pyogenic infection; diverticulitis; fresh intestinal anastomoses; active or latent peptic ulcer; renal insufficiency; hypertension; osteoporosis; and myasthenia gravis.

Growth and development of infants and children on prolonged corticosteroid therapy should be carefully observed.

Although controlled clinical trials have shown corticosteroids to be effective in speeding the resolution of acute exacerbations of multiple sclerosis, they do not show that corticosteroids affect the ultimate outcome or natural history of the disease. The studies do show that relatively high doses of corticosteroids are necessary to demonstrate a significant effect. (See DOSAGE AND ADMINISTRATION.)

The pharmacokinetic interactions listed below are potentially clinically important. Mutual inhibition of metabolism occurs with concurrent use of cyclosporin and methylprednisolone; therefore, it is possible that adverse events associated with the individual use of either drug may be more apt to occur. Convulsions have been reported with concurrent use of methylprednisolone and cyclosporin.

Information for the Patient[edit | edit source]

Persons who are on immunosuppressant doses of corticosteroids should be warned to avoid exposure to chicken pox or measles. Patients should also be advised that if they are exposed, medical advice should be sought without delay.

When high dose therapy is desired, the recommended dose of A-Methapred sterile powder is 30 mg/kg administered intravenously over at least 30 minutes. This dose may be repeated every 4 to 6 hours for 48 hours.

In general, high dose corticosteroid therapy should be continued only until the patient’s condition has stabilized; usually not beyond 48 to 72 hours.

In other indications initial dosage will vary from 10 to 40 mg of methylprednisolone depending on the clinical problem being treated. The larger doses may be required for short-term management of severe, acute conditions. The initial dose usually should be given intravenously over a period of several minutes. Subsequent doses may be given intravenously or intramuscularly at intervals dictated by the patient’s response and clinical condition. Corticoid therapy is an adjunct to, and not replacement for conventional therapy.

Dosage may be reduced for infants and children but should be governed more by the severity of the condition and response of the patient than by age or size. It should not be less than 0.5 mg/kg every 24 hours.

Dosage must be decreased or discontinued gradually when the drug has been administered for more than a few days. If a period of spontaneous remission occurs in a chronic condition, treatment should be discontinued. Routine laboratory studies, such as urinalysis, two-hour postprandial blood sugar, determination of blood pressure and body weight, and a chest X-ray should be made at regular intervals during prolonged therapy. Upper GI X-rays are desirable in patients with an ulcer history or significant dyspepsia.

Use solution within 48 hours after mixing.

This article has been revived from the former medical wiki Medpedia.