(Redirected from Disorders of the Autosomes)

Most of carriers of autosomal mutations die during their development and usually not born. Especially monosomies in fetus are connected with abortion. Children with trisomies and deletions who are born, suffer from physical and mental retardation and have shorter life at all.

The cause of these disorders is usually meiotic nondisjunction – parents have normal karyotype. 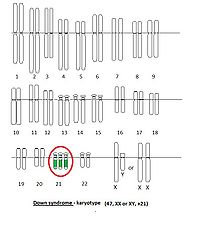 Down syndrome is very well-known trisomy. Trisomy was first described in 1866 by scientist John Down, and later elaborated upon with much greater detail through the Karyotype of Trisomy discovery in 1959..

There are three types of origin. The most common is an extra chromosome 21 (95%). Sometimes (4% of cases) a small parts of chromosome 21 translocate to 14 or 22 chromosome. In 2% of cases we can find mosaic. Mosaic means that person has some cells with trisomy and some without. The last two examples have less severe symptoms. The extra chromosome is much worse.

People with Down syndrome have typical physical appearance. They have short body, flat faces, epicanthic folds (part of skin over the inner corner of the eye – the reason why they are sometimes called “Mongoloid”), small low-set ears and relatively large tongue. They have also motor problems because of small muscle tone. Carriers suffer more from leukemias, infections, cardiac malformations, epilepsy, hypothyroidism and Alzheimer disease.

The mental abilities are also worse.

The IQ of people with Down syndrome is about 50. It means that they reach a level of a small child – about 6 years old. On the second side their character is very friendly, warm and loving.

The cause of 21 trisomy is meiotic nondisjunction. Parents of the children have normal karyotype and no symptomes. Very big influence has the age of the mother. The higher age is connected with higher risks (higher means more than 35 years). The incidence is 1 in 25 live births in women older than 45 years.[1] 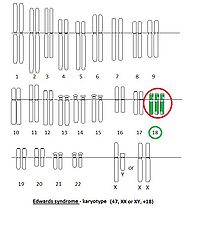 Edwards syndrome is connected with a trisomy of chromosome 18. The most of the affected individuals die during the prenatal stage. Newborns have multiple defects – micrognathia, short neck, congenital heart defects and renal malformations. The children look weak and fragile.

The incidence is 1 in 8000. Boys are more affected than girls. As the Down syndrome, Edwards syndrome is also influenced by the age of the mother. Nowadays there is no therapy and the cure is just palliative. Most children with trisomy 18 is not able to survive their first year and they die. 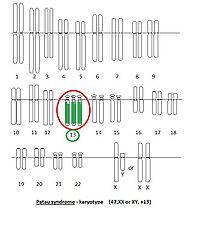 DiGeorge syndrome is caused by the interstitial deletion on the long arm of the 22 chromosome. The deletion can be pretty variable and it is connected with different clinical manifestations. The symptoms are palatal abnormalities, congenital heart disease, facial dysmorphia, microcephaly, hypocalcemia and thymic hypoplasia with T-cell imunity defect.

The treatment is dependent on the symptoms. It is important to start early. In serious cases of imunity insufficience the transplantation of bone marrow is necessary.